I Voted in Municipal Elections

I went down to the polling station which is in the Ohel Shiloh Banim, local boys school very early to get "training," since I had volunteered to be an "observer." Well, there was no training, so I just voted early. And I highly doubt that I'll return to "observe." There will be enough "observers" without me, Gd willing.

Even though I have written/blogged quite a bit about my choices, I know from long experience that once people are in office, they tend to "surprise" us. Sometimes it's for good, but more frequently for bad.

Between Free Will, that major responsibility that Gd gifted us, and siyate d'Shmaya, when Gd overrules, it's not a good idea to think that we can predict much. The only thing we can really predict is that things won't go exactly as expected, and that officeholders rarely do what they promised when campaigning. 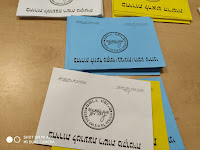 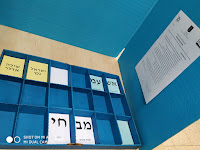 When confronting choices, like I had in the "booth" behind the screen, sometimes we change our mind. You may have noticed that I only blogged about two of the choices we had to make, two of the issues. I wrote about head of the region, sort of the governor. And I wrote about the local council list. I wrote nothing about who should represent us in the regional "parliament." That's because I couldn't choose. One campaigned that he'd work as part of the coalition no matter who's in it, which turned me off. I'm too much an idealist. I like policies and plans. The other one just wrote all sorts of ordinary platitudes, to make everything "better." That didn't enthuse me at all. I had been thinking of an empty envelope, or two ripped half ballots. I even thought of playing a "switching game" with my eyes closed and the ballots upside down, so I wouldn't know for whom I voted. At the last second I made a choice, but since it wasn't with my full heart, I won't say who got my vote.

I consider it very important to vote, even in the case when you're not impressed by the candidates.

An important thing I want to show and tell you is that our voting station is handicapped accessible! Take a look at the picture below. Thank Gd the location is perfect. It's also near bus stops. 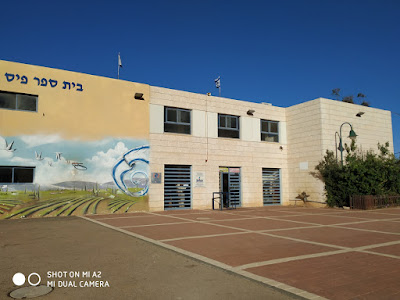 Gd willing, the results will be the best possible. That we will only discover in the months and years to come.
Posted by Batya at October 30, 2018