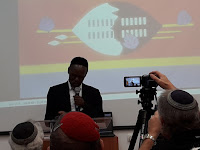 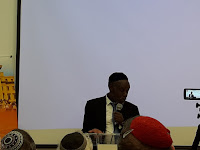 Last week I attended an amazing talk by a person whose life could be a movie script, one of those most people would claim as unrealistic impossible. 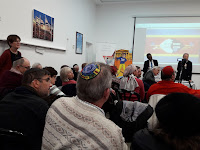 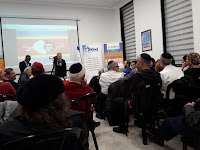 Rabbi Natan Gamedze told his story to Telfed, the South African Zionist Federation of Israel and many others who crowded into the packed lecture hall.

Many of my friends are converts, and some also have rather interesting family stories, but Rabbi Nati's story is even more unusual.

In telling his personal story, Rabbi Nati also gave some reasons for the political instability in Africa, which are the same as in other parts of the world. When he was growing up, his grandfather was a preacher, having abdicated his throne in order to be more active in the church. That was pretty good timing, since Britain had redrawn borders, combining a number of incompatible tribes into the same country. In compensation, Rabbi Nati's father was given important cabinet posts.

When Rabbi Nati was a university student in South Africa he was very friendly with Jewish students and even visited them at home and went to events in the synagogues. There was still apartheid at the time, and it was rare for blacks to be so friendly with whites. At that time he wasn't interested in theology.

Rabbi Nati studied languages. He is fluent in many. And it was in a language course that he noticed someone writing a strange-looking language from right to left. That piqued his curiosity, and he ended up taking Hebrew courses which brought him to Israel. And he was curious about Judaism, finding that its theology made sense to him. Judaism is a unique Truth. Now, not only does he teach Judaism here in Israel, but he travels all over lecturing. The movie below tells his story better than I could.

Since this blog article is about
a person of non-Jewish birth who
discovered the truth about Judaism,
I believe these links fit that theme:

And it's because there are so many great tzaddikim converts that you can't rely on dna to determine Jewish identity.