Israeli EFL has a Lot to Learn

This morning I posted about this topic more from the aspect of parents' responsibility to demand change. EFL Teaching in Israel, Sigh... Now I want to write about how the Israeli EFL teachers and the school administrations must demand change. 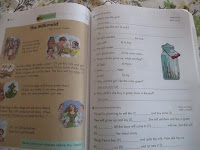 When I was teaching remedial English in a yeshiva high school I didn't expect my students to know much in terms of basic language skills, but when I started getting regular and even top English groups I was really horrified. There were almost no actual English speakers in these groups; they were the elite, the success stories of the system. And not only were they above average in English, but they were supposedly good or excellent students in other subjects, especially, those to do with Hebrew.

The standard, non-remedial, English curriculum expects/demands that the students write compositions in the 9th grade, if not earlier. One of the early chapters in the book from which I taught aimed to make the students aware of the difference between fact and opinion, objective and subjective. I was very excited by the high level and relative sophistication of this text book. But then I was shocked and rather devastated to discover that: 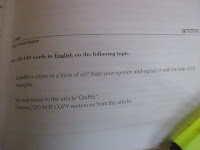 That was just the beginning of my disillusion. I "reported" the problems to the administration and was brushed off.


Me: "How can it be that my top 9th grade students can't write compositions in Hebrew when they need them for English already?"
Boss: "Don't worry. They will learn how in the 12th grade for their Hebrew Composition Bagrut."
Me: "Duh?"

Then I discovered that even these "top" students barely understood the brilliantly simple and logical Hebrew grammar, which is easily divided into active and passive verbs and even adjectives. My horror only grew. These unfortunates had to learn Hebrew grammar from yours truly. So I tried a different "campaign."


If you want the students to do better in English, improve their Hebrew Language skills.

For that idea, I was basically persona non grata.

The English Department in the Education Ministry also noticed the low level of basic language skills, including how your typical Israeli student has been learning literature. But, unlike my suggestion that this be remedied in their native tongue, the English Department has developed a curriculum that mimics an English language country. They pretend to be in "New Jersey." 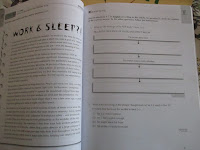 You don't have to be a PhD, or maybe it helps not to be, in Linguistic Pedagogy to know that language skills, grammar, literature, composition etc are most easily taught, learned and kept in the brain when it's done in one's native tongue. When these things are taught in native tongue, then they internalized and are easily transferred to foreign languages. But the opposite isn't true. If someone learns these skills in a foreign language, they usually stay in that part of the brain. You'd be totally horrified to know what percentage of my students insisted that "there's no passive in Hebrew."

I titled this post as "Israeli EFL has a Lot to Learn," because there is something very crucial that the heads of the Israeli EFL bureaucracy must learn, and that's Hebrew. They must raise their Hebrew to a level in which they can enter the regular Hebrew-language system and teach all of their wonderful ideas and language skills in Hebrew to teachers and students.

Then the EFL departments can do what they should be doing, teach English.
Posted by Batya at 10:51:00 AM

Couldn't have said it better. Every word is a gem.

Margie, thank you so much.

This reminds me of when I review Parts of Speech and the kids say:
What is this שיעור לשון????"
Duh
.....

Exactly. People who have a good knowledge of their mother tongue can learn others on a high level, but if you don't grasp the grammar of your native language, you'll never be able to learn a foreign language well.

Hi! I'm an English teacher and I completely agree with you. It's very frustrating to explain to students the difference between verbs, nouns, adjectives and adverbs when they have no idea what these things are in Hebrew. It would be so much easier to explain the English terms if they had a better idea about the Hebrew ones!

Unfortunately, there is nothing unusual
about the participants of a broken system
to be not interested in fixing their
broken system, even when they are its victims.

The shidduch system is obviously
a broken system, but anyone attempting to
really fix it is at risk of becoming a
persona non grata.

Hypocrisy of the Anti-Israel BDS Movement:

AGS have you complained to the school? Talk to those responsible for native tongue. Bring it up in staff meetings.

Hopefully your wise realization gets to the minister of education. He is starting new and advanced reforms in terms of encouraging speaking. Maybe he'll do something to remedy this problem as well.