"Roman Holiday" and The Death of Diana

I'm a bit embarrassed to admit, but I was among the millions to have watched some of the new documentaries that came out for the 20th anniversary of the death of Diana Princess of Wales. I can't say that I was ever one of those enamored with her, but I must say that she helped "humanize" the British Royal Family in ways that the "casting director" and "vetting committee" could never have predicted in their worst nightmares. 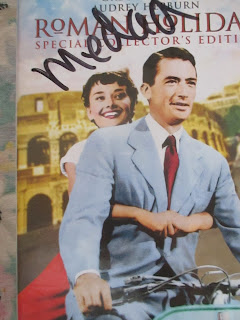 I think that many of you, if not all, know what I mean by "casting director" and "vetting committee." Her marriage, rather arranged/choreographed by what we'll call the "casting director" and "vetting committee" was the last of such marriages in the family. It ended up causing an explosion, comparable to a leaking sewer that just can't be stopped up, which spews all the "garbage" far and wide, further and further with time.

"Roman Holiday" is a favorite movie of mine. It tells of a princess who rebels and disappears when on "assignment" in Rome. She eventually returns to her duties, making do with memories of love and freedom. The movie came out in 1953 just when Princess Margaret, younger sister of Queen Elizabeth flirted with freedom. Her life ended up a sad one.

A generation later, her nephew Prince Charles also took the advice of the royal "experts" a gave up the woman he loved*. Close to a decade after that, when he had reached the it's time to get married already and have an heir age, First in Line to the Throne Charles agreed to marry the young virgin recruited and vetted, Diana.

We all know what happened to Diana. She believed the hype and thought that she could charm Charles into being a modern loyal and loving husband. He had been hoping for a cooperative photo-op wife who would give him and heir and spare, plus the freedom that most, if not all, royal and aristocratic men took for granted.

Twenty years after Diana's death more unpleasant revelations are coming out about their relationship and the royal family. But one good thing we see is that the younger generation seem to be much more grounded and "ordinary" than ever before for royals. And I think one of the major reasons is that Diana wasn't on the scene to finish raising her sons. Towards the end of her life she showed less maturity and stability. I think that the boys actually ended up better and stronger without her being around.

Of course, time will tell. It must be really awful to be living under a microscope.

*Remember that Queen Elizabeth and Princess Margaret's uncle gave up the throne for the love of his life. In the 20th century, the many British royals were having public problems with their marital restrictions.
Posted by Batya at September 01, 2017

Israel Praised by Muslim from Bangladesh:

7 Reasons why Israel Belongs to the Jews:

That's right. Her last two "partners" were both Arab.

Just the last. The previous was pakistani, muslim, but not arab

Thanks for the correction, Muslim not Arab.