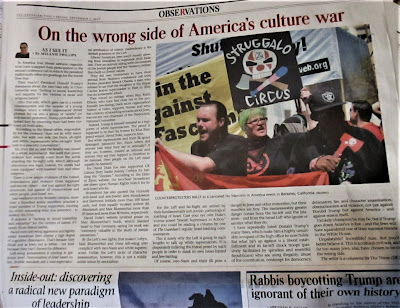 If anyone is “lacking in moral leadership and empathy” for the victims of hatred, it’s surely the liberal rabbis.

In America, four liberal rabbinic organizations have scrapped their participation in the annual conference call in which the president traditionally offers his greetings for the Jewish New Year.

Their reason? President Donald Trump’s statements about the neo-Nazi rally in Charlottesville were “lacking in moral leadership and empathy for the victims of racial and religious hatred.”

After that rally, which gave rise to a violent counterprotest and the murder of a young woman when a white supremacist driver plowed his car into a group of “antifa” (or anti-fascist) protesters, Trump provoked widespread fury by observing there had been violence on both sides.

According to the liberal rabbis, responsibility for the violence “does not lie with many sides, but with one side: the Nazis, alt-right and white supremacists who brought their hate to a peaceful community.”

Yes, they did so; and the fatality was caused by a white supremacist. But until that point, violence had mainly come from the antifa attacking the far-right rally, which although obnoxious was legal; indeed, the antifa had come equipped with baseball bats and other weapons.

There is now ample evidence of the hatred, intimidation and violence these supposed anti-fascists direct – not just against far-right extremists, but against all conservatives and white people, and Israel, too... (For complete article click here.)


RABBIS BOYCOTTING TRUMP ARE IGNORANT OF THEIR OWN HISTORY
BY ABRAHAM H. MILLER AUGUST 31, 2017 20:31 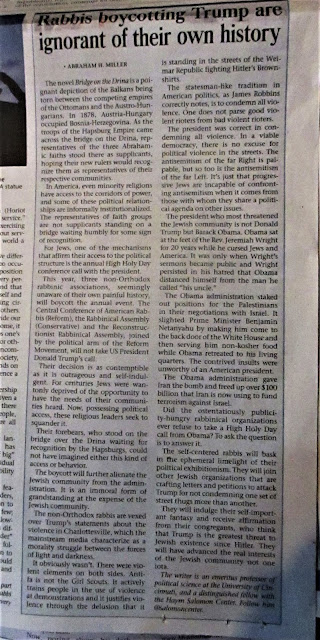 The president was correct in condemning all violence. In a viable democracy, there is no excuse for political violence in the streets.

The novel Bridge on the Drina is a poignant depiction of the Balkans being torn between the competing empires of the Ottomans and the Austro-Hungarians.

In 1878, Austria-Hungary occupied Bosnia-Herzegovina. As the troops of the Hapsburg Empire came across the bridge on the Drina, representatives of the three Abrahamic faiths stood there as supplicants, hoping their new rulers would recognize them as representatives of their respective communities.

In America, even minority religions have access to the corridors of power, and some of these political relationships are informally institutionalized.

The representatives of faith groups are not supplicants standing on a bridge waiting humbly for some sign of recognition.

For Jews, one of the mechanisms that affirm their access to the political structure is the annual High Holy Day conference call with the president.

This year, three non-Orthodox rabbinic associations, seemingly unaware of their own painful history, will boycott the annual event. The Central Conference of American Rabbis (Reform), the Rabbinical Assembly (Conservative) and the Reconstructionist Rabbinical Assembly, joined by the political arm of the Reform Movement, will not take US President Donald Trump’s call.

Their decision is as contemptible as it is outrageous and self-indulgent.

For centuries Jews were wantonly deprived of the opportunity to have the needs of their communities heard. Now, possessing political access, these religious leaders seek to squander it.

Their forebears, who stood on the bridge over the Drina waiting for recognition by the Hapsburgs, could not have imagined either this kind of access or behavior.

The boycott will further alienate the Jewish community from the administration.

It is an immoral form of grandstanding at the expense of the Jewish community.

The non-Orthodox rabbis are vexed over Trump’s statements about the violence in Charlottesville, which the mainstream media characterize as a morality struggle between the forces of light and darkness.

It obviously wasn’t. There were violent elements on both sides. Antifa is not the Girl Scouts. It actively trains people in the use of violence at demonstrations and it justifies violence through the delusion that it is standing in the streets of the Weimar Republic fighting Hitler’s Brownshirts... (For complete article click here.)
Posted by Batya at September 02, 2017

http://shilohmusings.blogspot.com/2016/03/guest-postnyt-vs-israel.html
How to Convict the New York Times
of Unfair Bias Against Israel:

Topic is more American extreme Left and the stupidity of American Jews.