Over the many decades, actually over half a century, since I began to live a life of Torah and Mitzvot, of the little I heard about "Musser," it didn't attract me. 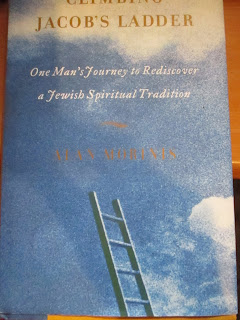 Yesterday, the Shabbat just after Rosh Hashanah, actually a Tzom Gedalya when we feast rather than fast, I was searching for a book to read. I knew that I had a pile of books from various friends, and usually there are some great ones. Nothing interested me. I really tried, but after a few pages, they were closed and piled up. I gave each a chance by reading at least ten pages, and the pile of rejects was growing. I was getting pretty frustrated and depressed by the time I got to Climbing Jacob's Ladder: One Man's Journey to Rediscover a Jewish Spiritual Tradition, by Alan Morinis. And when I discovered that it was about Musser, I audibly groaned.

I know pretty much nothing about "Mussar," except for the expression a "a musser spiel," which seems to mean some sort of rant that criticizes how a person or group is behaving. At least that's how I've always understood it.

But I was desperate enough to try reading the book. I was pleasantly surprised. The way that Morinis defines Mussar, which he found after his search for a spiritual reawakening, is very different from what I had been expecting. It does involve trying to improve yourself, but it's closer to the what I had learned a few years ago in a "Life Coaching" course. And it involves learning how to accept and take advantage of the unexpected, like my finding davka that book in the house, and davka the day after Rosh Hashanah.

From what I now understand, Mussar doesn't tell us how to live, it tells us how to deal with life, make the best of life, or how to play with the cards we've been dealt.

Apparently, we're supposed to "train" ourselves, since there are Mussar "exercises" to prepare us for life's difficulties. I guess it is like Life Coaching. And also like Life Coaching, each Mussar teacher teaches it differently.

There are definitely some very valuables principles in Mussar, and I must adapt them into my way of thinking and living. More on this at a later time, Gd willing.
Posted by Batya at September 24, 2017