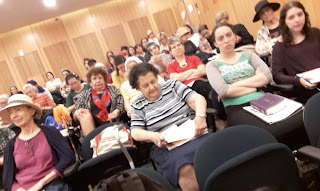 Yesterday I had a wonderful time in Matan, Jerusalem, preparing my soul for the spiritual aspect of Rosh Hashanah and Yom Kippur. And I have many friends who have already begun cooking and freezing food for the holiday meals.

It's difficult to believe that there are many Jews, and of course millions of others, who may not even know where they will be for the holidays. They've been forced from their homes by two catastrophic storms, Harvey and Irma.

The ramifications of Harvey on Texas have yet to be calculated, and people are fleeing their homes in Florida, as I write this.

In just two weeks it will already be Rosh Hashanah, the beginning of the Jewish Year, a two day holiday, which this year is "extended" to three, since there's no break before Shabbat.

The month leading to Rosh Hashana is Elul, when we are supposed to do Teshuva, which is more than repentance. We're supposed to carefully think of our past year and how we should do better in our relationship to Gd and our fellow man.

As the many millions of people who live in the areas of the American south, who have been and are being affected by Harvey and Irma know much too well, Gd who controls the weather is most powerful.  The powers of man are ridiculously puny in comparison.
Posted by Batya at September 07, 2017

'The powers of man are ridiculously puny in comparison.' Isn't that the truth?!