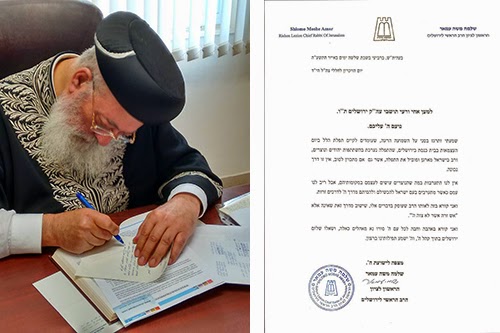 Contrary to Rabbi Riskin's statements in media outlets accusing the Haredim of launching a campaign against his joint Christian-Jewish worship event in Jerusalem on Israeli Independence Day, it was rabbis and activists solidly in the Zionist national camp who questioned the endeavor and who approached Chief Sephardic Rabbi of Jerusalem Shlomo Amar in a meeting held on Israel's Memorial Day.
The “Day To Praise” venture was an idea conceived by David Nekrutman while he was studying Christian theology at Oral Roberts University. The event, held at Hatzvi Yisrael Synagogue, was promoted as being affiliated with Ohr Torah Stone. It was expected to be both "controversial and revolutionary" according to the Voice of Israel radio…more

Rav Aharon Lichtenstein Z”L Upheld Rav Joseph Soloveitchik's Interfaith Directives
Prominent scholar Rabbi Dr. Aharon Lichtenstein passed away this week. He was the director of Har Etzion Yeshiva, a renowned authority on Jewish law, and a recipient of the Israel Prize.
Despite being considered "modern" and "open " in his worldview, Rabbi Lichtenstein, an eminent student of the late Rabbi Joseph B. Soloveitchik (known as "the Rav"), upheld the Rav's traditional position on interfaith dialogue and relations with the Christian world...more
Posted by Ellen at 9:26:00 PM

Proves Rabbi Lichtenstein, ztl, was a real Rav and deserved all the honor he received at his lavayeh.

And what about the board or Rabbinic head of the Hatzvi Yisrael Synagogue? How could such an event be allowed? Years ago, when we used to have Christian groups visit us in Shiloh, Rabbi Elchanan Bin Nun forbade them to do any sort of ceremony in the synagogue.

Ellen, thanks again for posting these important articles on Shiloh Musings. Tizki limitzvot

Truth is that Erev Rav are amongst even the most 'religious'. The Ramchal lets us know that, among others. Rabbi Elchanan Bin Nun is obviously,B'H, not one of them. That's why he forbade. But the rabbi of the Hatzvi Yisrael Syn. is either a weakling or just one of them too. Riskin should be outed by righteous Rabbis for the sake of the Jews of Israel, many of whom are vulnerable to falling into this trap.