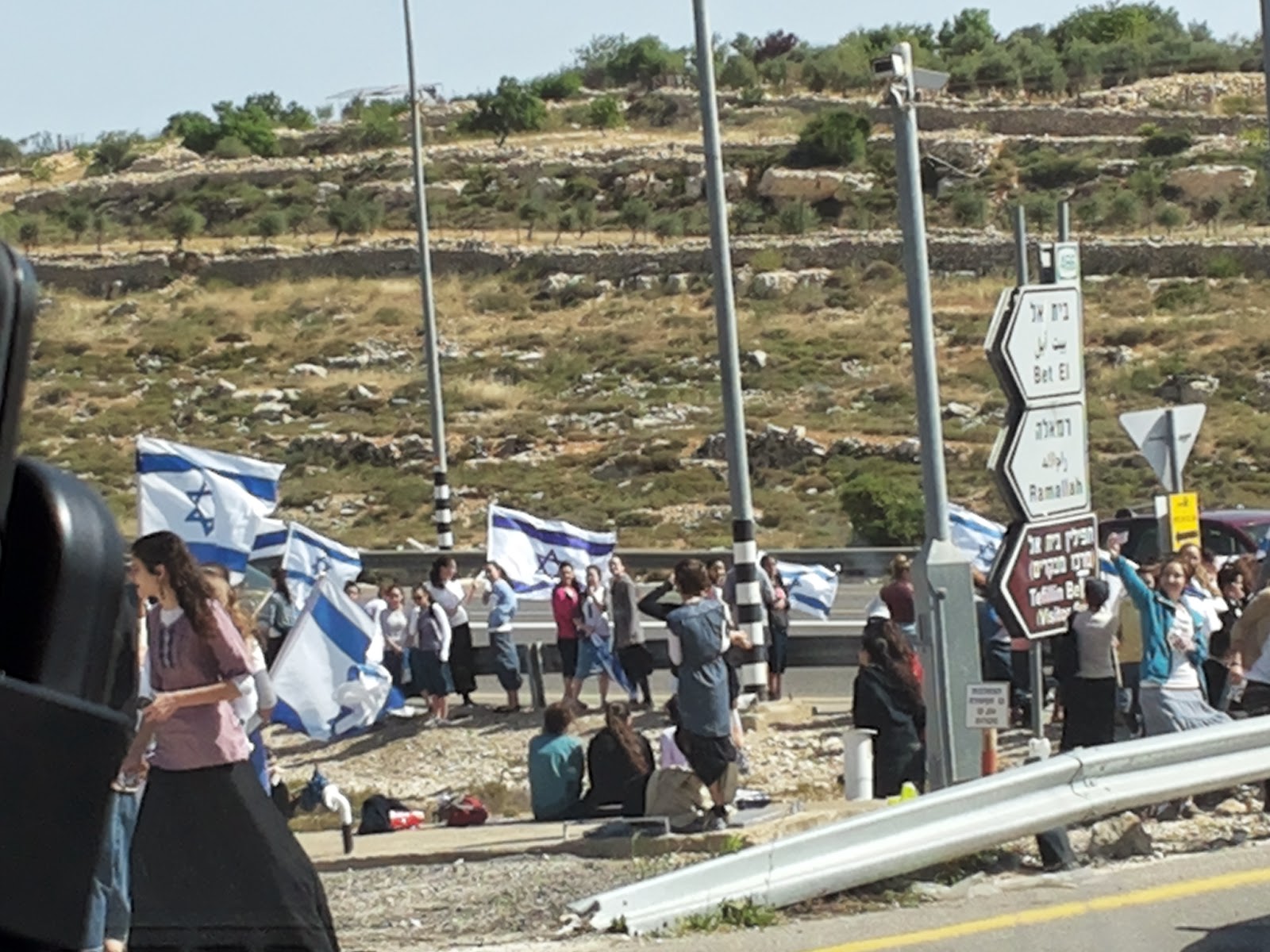 In Israel many towns, villages, cities, kibbutzim and moshavim are named after people. That includes quite a number of yishuvim in Judea and Samaria, such as Givat Assaf, established in memory of Assaf Hershkowitz of Ofra murdered as he passed there, the junction to Beit El where school girls stood yesterday waving Israeli flags to the passing cars, Jewish, Arab and all those "diplomatic plates" on their way.

Yesterday I caught a tremp (hitchhiked) from the Sha'ar Binyamin to Ofra with a young woman. We began to talk, and she told me that she lives in Givat Harel. I asked her how many families now live there; sixty 60 was her reply. I was obviously impressed at its growth.


"You probably remember when there were only ten families" she said.
"I remember Harel" I replied.

Yes, for me they are people, these communities and towns. I taught Assaf's brother, know Harel's family well, and Rachalla Druk, for which Shvut Rachel and Rechallim were named, was a very good friend. 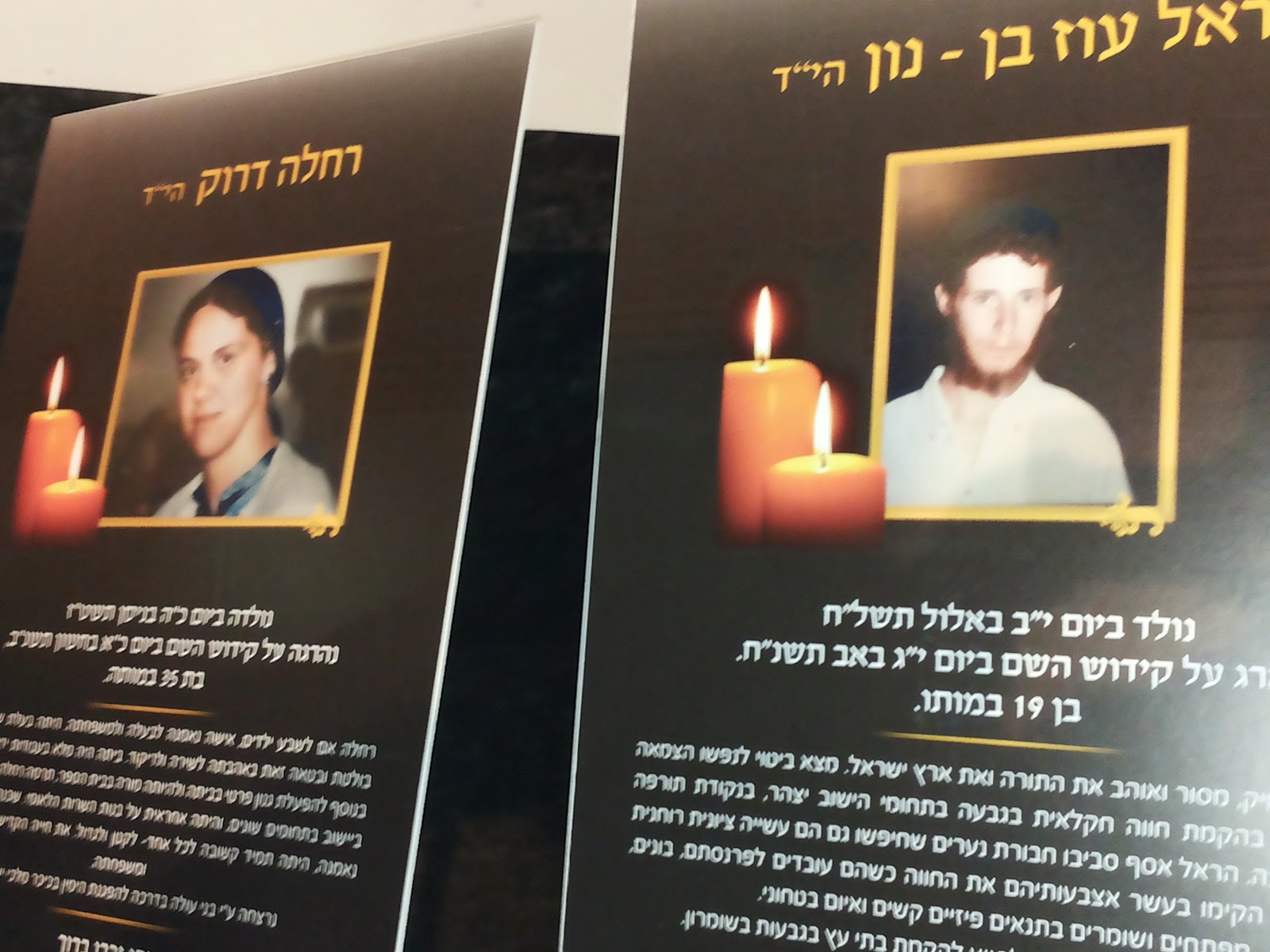 When I look at these places, the homes, gardens, children and public institutions I feel a sadness and also a wonder. I wonder if the precious people whom they are named for are observing and guarding them from their status in Olam Haba, the Next World.

And for many years I've felt that if only we had established these communities sooner, then the victims would not have been killed. This is because the communities in the locations where they now are would never have had been established there if we hadn't been looking for a way to memorialize their lives and values.

Last night as I walked around our traditional display of victims of Arab terror connected to Shiloh, whether residents or family members of those who live here, again, like every year I felt that it had become harder for me than the year before. It just hurts more. I look at the pictures of those I knew and whose families I know and the pain is endless, reverberating as I see those optimistic faces. I see their siblings, parents and grandparents. I see the grandchildren, nieces and nephews they never knew. I see those named after them who will G-d willing be granted long, healthy and successful lives. Recently friends wrote a moving letter that they took their grandson, the first-born grandson of an IDF solder, a friend of ours, who had been killed in action, to enter the IDF. I tried to find the right response as I fought back tears.


"May he merit to bring his grandchildren to join the army, just like you are doing." 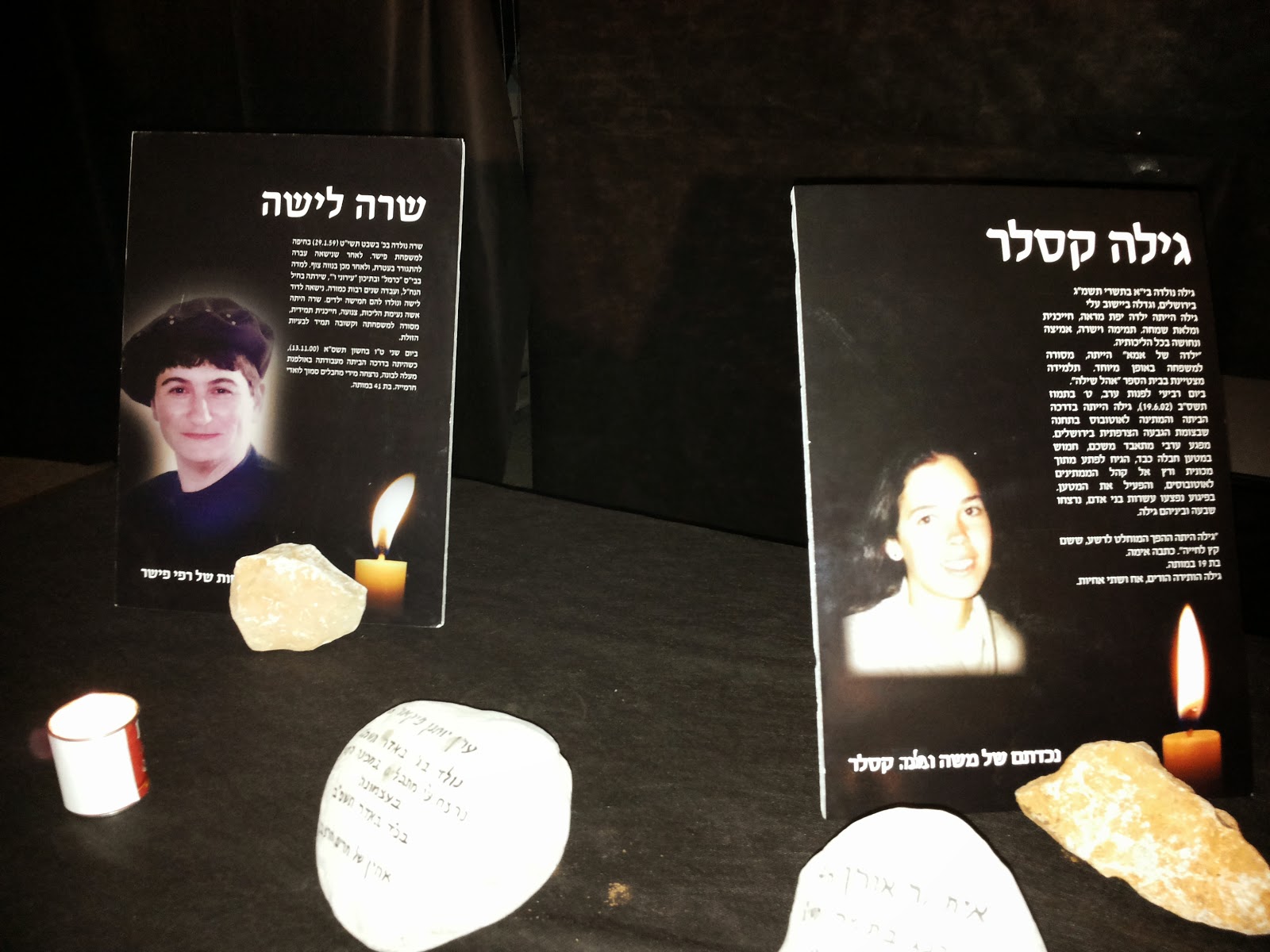 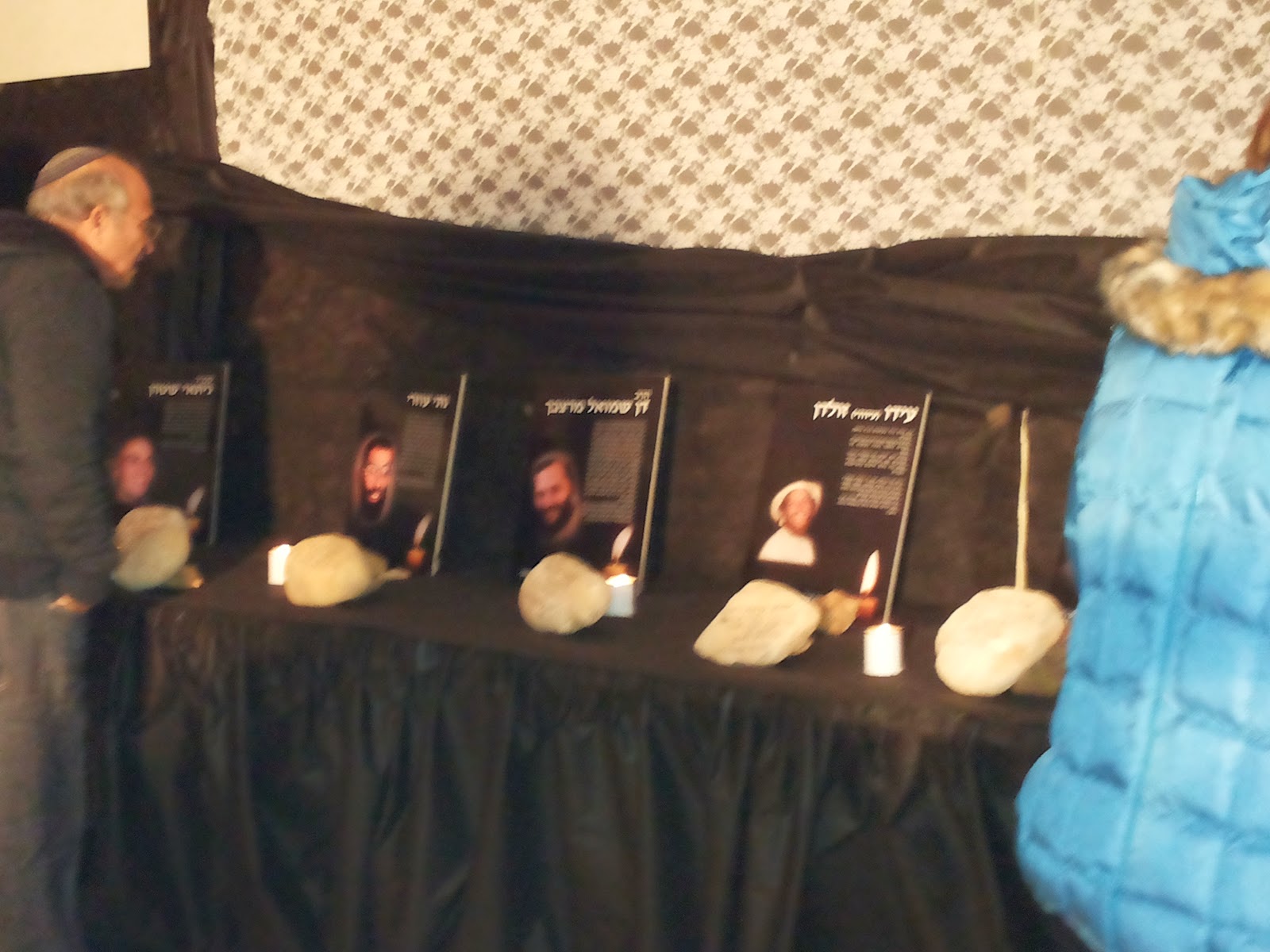 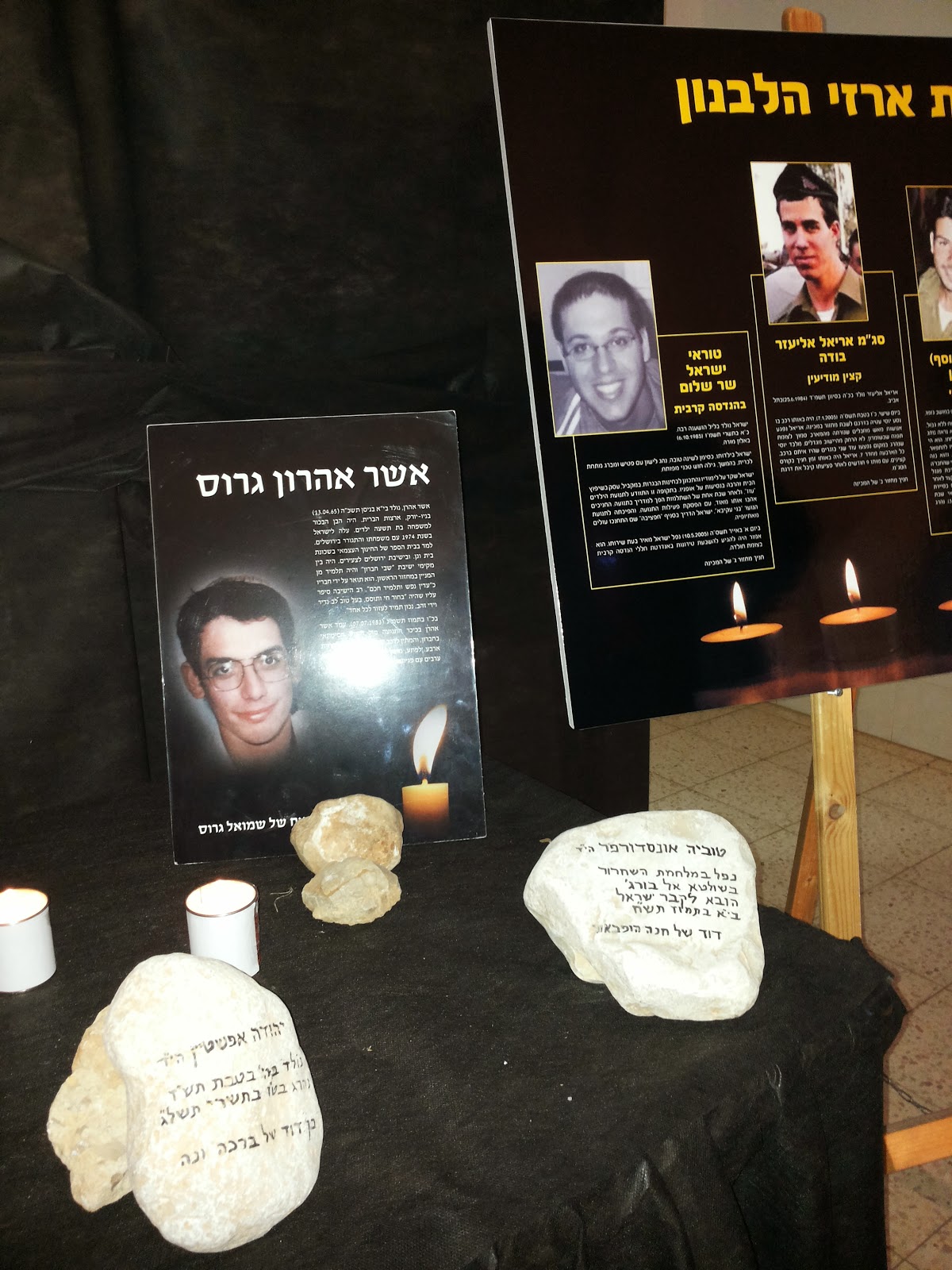 We in Israel know very well that our independence did not come easily nor cheaply, and the struggle hasn't ended. I fully approve and agree with the custom of having Israeli Independence Day follow immediately after Memorial Day.

Amen. I pray for techiat hameitim when they can be reunited with their families....