Reflecting on Life in Shiloh versus Living Any Place Else 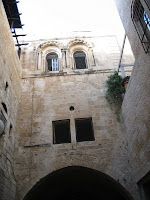 It's now forty-two years since my husband and I docked at Haifa Port, a young, naive, idealistic couple.  We were focused on one thing.  We wanted to live in Israel.  Exactly where, we didn't know, though some place which had been liberated during the 1967 Six Days War would be good and starting in Maon Betar in Jerusalem's Old City was just perfect for us. Just under a year later, immediately after the birth of our first child, we moved to the Bayit V'Gan neighborhood of Jerusalem, and ten years after that we moved to Shiloh.
It is now thirty-one years after our move to Shiloh, and not only has Shiloh changed tremendously, but we have, too.

Moving to Shiloh was the second best thing we have ever done.  The very best thing was that move to Israel, even though our families and even some friends thought we were crazy.  It was just two months after our wedding.  I was a college drop-out and my husband didn't have a profession.  At least he was fluent in Hebrew; my Hebrew was rather minimal.

It's not that we've become great successes and wealthy here in Israel.  I sincerely doubt that we would have reached any greater relative wealth and success if we had stayed in the United States.  Not all American Jews are wealthy and successful.  I know that as fact.  And not all are happy and secure.

One thing for sure is that we don't have to rationalize and make excuses for not making aliyah.  Many of our former peers are in that rut.  Some of them have perpetuated the problem by using the same faulty reasoning with their kids that kept them in the states.  "Come back to America to finish college."  That's the absolute worst advice one can give.  Not only is an American college education expensive, but it deprives the student of the best way to learn Hebrew and get the necessary education and culturazation to succeed in Israel.  It's just a tricky way to keep American Jewry going or staying put.

I've been enjoying reading the saga of Daniel Eisenbud's Odyssey in the Jerusalem Post.  Eisenbud is of my children's generation and was raised in a more affluent family than me and my husband, from what I've caught in his essays.  He also made aliyah much older than we did.  In his latest article he writes of relative happiness and stress comparing Americans to Israelis.

Indeed, US anxiety levels have reached epidemic proportions, despite the fact that America’s borders are comparatively secure, and its citizens have endured a relatively nominal number of terrorist attacks.

Conversely, and counter-intuitively, data shows that the prevalence of anxiety among Israelis is markedly lower, despite the country’s epically volatile borders and constant acts and threats of violence against it...

The difference between Israelis and their Western counterparts, I believe, is that they have experienced so much unabated violence and tragedy since the country’s founding in 1948 that they have been forced to become mentally conditioned to absorb and compartmentalize the blows – and to productively move on – more than the citizens of any other democracy in the modern world.

I don't think that Eisenbud gets it.  And I'm coming to my conclusion as a terror survivor.  Yes, I was injured in a terror attack, so my perspective is very first person.  I don't consider myself "stoic," an adjective Eisenbud used in his article.

One of my first reactions after the terror attack was a reduction in fear.  I recognized that I have no control; only G-d controls life and death.  Since my survival was not due to anything I had done, then I had to relax and trust G-d.  There is much more recognition or acceptance of G-d's power in Israel than in America, and that's why fewer Israelis pop various mood medications than Americans do.  Even self-proclaimed secular Israelis study traditional Jewish texts in secular yeshivot, go to revivalist Jewish events, like Slichot and live according to the Jewish Calendar and holidays.

Another important difference between American and Israeli mental states is that we in Israel know who our enemy is and what it wants.  The Arabs, with the backing of most of the world, want to destroy us.  That knowledge helps us fight it, though as you regular readers must know I have plenty of complaints about how our government does this.  Americans are more traumatized by the threat of terror, because they have no idea from where or why it may come.  Bin-Ladin was executed, and United States President Barack Hussein Obama takes credit for that, but security is still high in the states.  One of the reasons they refuse to profile and continue to do useless personal checks on obviously innocent people like myself  is because American security experts refuse to state who the enemy is.

That results in a nebulous and constant fear, stress and tension for Americans.  And because Americans keep insisting that America is the best place they get all stressed out trying to reconcile the inconsistency which is impossible.

Living in Shiloh, I don't have that problem.
Posted by Batya at September 09, 2012

Well said. Going as newlyweds was the best investment in your future. 20-years post-newlywed with kids ranging from 4-18, I am finding it much, MUCH harder to extricate myself. Families get MORE complicated as the years go by... parents get older, sisters get more fun to be with, everyone gets attached to your kids.
http://aliyahland.blogspot.ca/2012/09/saying-goodbye.html
My advice to everybody is - leave as young as possible; it only gets harder, until eventually, most of us find it nearly impossible to leave.

We were so focused on the necesity of aliyah we never saw any real problems with it.

As always, Batya - an excellent article. I too find it so hard to imagine the aliyah of today. We came much later than you - only 19 years ago - but like you, we've never looked back, never thought we left something more precious than we found here. Kol hakavod for sharing what so many of us feel. Shana tova to you and yours! May it be a year of health, security and for once, intelligent government decisions on what is needed to ensure our continued safety in our land.

We were all so sure of ourselves back then.To be honest even to the point of arrogance. Did we make the right choices? I felt almost as if I had no choice, that something inside me that I couldn't really explain was propelling me to make Aliya. I remember a meeting of the Shiloh garin in our 2 room apt in Talbieh. Ten young people in their 20's talking about settlement in the Shomron. In the end we went to the Golan but were forced to leave when our dream of cooperative living (moshav shitufi)collapsed. You and Winky are still in Shiloh and can rightfully be proud of what you have accomplished.Yasher Kochachem!!

How wonderful not to have regrets about the move to Israel and Shiloh! Kol Hakavod! Shana tova

The quality of American Jews has gone downhill very badly in the past generation. You are lucky they did not arrive en masse. You'd be better off taking in even more Thailanders. Just keep your cats and dogs indoors when it's the Queens Birthday......


to Jennifer: your words make it sound like you feel that Israel is merely for Jewish refugees; you're too comfortable to bother. But you see, you're measuring the wrong thing. What good will your comfort do you when your great-grandkins are speaking Ebonics? Batya only has to worry that hers will end up complaining that Hebrew standup comedians give less minutes-of-performance/dollar-of-ticket to Israelis in Gush Dan, than to Israelis in Tarzana.

Paula, David, yes, there was something very focused, or "never looked back" or even "the point of arrogance." David, you would have found yourselves waiting longer in Talbiye if you had chosen Shiloh. but maybe we'd be neighbors...

Sharon, now that you're here, do you have regrets?

Alan, I don't think you get it. Sorry, I don't know what you're referring to. I don't think that Jennifer considers "Israel is merely for Jewish refugees."

The conclusions you draw appear somewhat missing the point. I would think your move to Israel is a most wondrous opportunity you gys took advantage of. But to think that we in America do not know that danger lurks in many places in Israel, is frankly absurd because I take note of the changes over the years. Arabs, by getting a little more each time, become mischievous to get even more. It used to be they held their noses down. Today you won't find one Arab who would keep his nose down. The roads have become outright dangerous as of late. Before that we could have travelled the roads, only had to careful not to make wrong turns. Israeli news reports now are frequently about road killings, attempted hijackings, sniper shootings, etc. In fact, this is probably a major reason for your friends of old who today have a quandary about making Aliyah or not. They know full well the situation there. It is a matter of being Jewish that this threat makes itself tangible - not where the Jew lives. Because Israel belongs to every Jew, no matter where he or she lives, and they know it a - and yearn for Israel to become a sane place to live.

van, then why are more Americans more fearful, stressed out and medicated if Israel isn't a "sane place to live?"
Too many mitzvot are contingent on being in the HolyLand for one to think that being Jewish is the same wherever you are.