I'd say that women are pretty powerful in today's Jewish media, at least when you're in my end of the political spectrum.  There are few writers I agree with, and they are almost exclusively female.  There must be something in our hormones, I'd say.

Here in Israel, many of us are mothers of a soldier or two or more.  Paula's blog, A Soldier's Mother tells of the experience from her perspective.  She's also very involved in the Jewish blog world and is generous with her time hosting the floating internet magazine, Havel Havelim.  Read the latest one.  You can contribute your own posts via blog carnival (just sign up with them first and be careful to click that you agree to their conditions) and get involved, even hosting, by joining our facebook page. 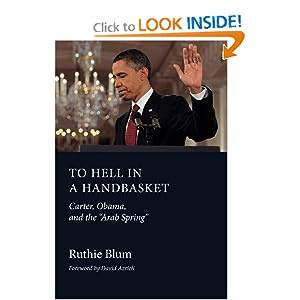 One of my favorite writers here in Israel is Ruthie Blum who is also the mother of soldiers in the IDF.  As long as our kids still do milu'im (reserve duty) we're in the club.  Ruthie became a popular writer here when she wrote for the Jerusalem Post.  Now she writes a couple of op-eds a week for Israel Hayom and just published a book,  To Hell in a Handbasket: Carter, Obama, and the "Arab Spring."

Last night was a festive book launch at the Great Synagogue attended by many.

Ruthie was interviewed about the book and Carter's failures especially in his Iran policy by David Horovitz, former Editor in Chief of the Jerusalem Post.


The information Ruthie gave to us during the interview part of the program made it clear that the book is a must-read for all who are interested in recent history, the United States foreign policy and Israeli and world security.

It was a fascinating evening.

One unexpected bonus for me was when someone came up to me and asked me if I'm "Shiloh Musings."  Then she told me that she's a fan and thanked me for my daily postings.  Every once in a while I wonder if I should stop writing, if my posts make a difference for anyone.  Her thanks and encouragement were just what I needed.
Posted by Batya at September 03, 2012