Yes, The Rabbanit (Rebbetzin, Rabbi's Wife) Yemima, Not the Rabba

I wasn't quite sure what was acceptable when Rabbanit Yemima Mizrachi spoke in the Ofra Synagogue last night, so I only took a couple of pictures after it was over, and only one is even barely acceptable. You can see her in the distance wearing a black hat. 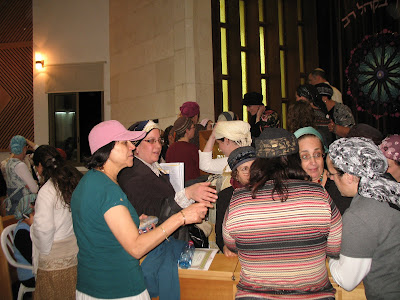 Strange for me, I have trouble remember her points, even though I was mesmerized and listened to every word.  But I'm very kinesthetic and feel experiences instead of memorizing verbal details.
Davka, on Shabbat we ate at neighbors and discussed the Rabbi Avi Weiss "Rabba" controversy concerning his ordaining Sara Hurwitz, as a "rabba," female rabbi.  Besides this "smicha," ordination controversy, I know nothing about Sara Hurwitz.  Her position in  is a job, which she shares with others.  As far as I'm concerned none of these private rabbinic "smicha" titles are all that convincing, man, woman or whatever.  I don't think the testing should be by the teachers.  The fact that it's Rabbi Weiss's school, shul, smicha etc makes it totally problematic as far as I can see.  There should be "checks and balances" like a good government system.  Hurwitz's attempt to break through that "glass ceiling" in the American Rabbinate seems much more like a worker's problem.  Since we don't have synagogue based Jewish communities here, and I've been living in Israel two-thirds of my long enough to get some discounts life  it's really difficult to relate to the issue.
The Rabbanit Yemima seems much happier in her frum female skin.  Not only isn't she trying to break through any glass ceiling, she reminded us not to obsess about Passover cleaning and to give the kids fun jobs, so they won't remember pre-Passover as a nightmare.  It's a bit too many decades late for me and my kids, but I'm glad that my daughter was influenced by better mothers.
As I wrote in last night's post, the Rabbanit Yemima's presentation is pure "stand-up."  Mary Poppins sweetened it with a spoon full of honey, and Rebbetzin Yemima with laughs.  Laughing is healthy.  The evening began with Tehillim, Psalms for the sick and those in need of other types of health.  If any of you were there, please give more details in the comments, thanks.
May this be for a refuah shleimah, complete recovery for :
Rachel bat Echya
and all others in need of our prayers
Posted by Batya at March 14, 2010

I'm very glad that I went to hear her.

Sounds like a wonderful speaker! I'm glad you went and shared what you learned:)


And thank you for the refuah shleimah and video for baby Sarah.

Yes, Keli, it was good to go and hear her. I hope Sarah's doing well.