The Red Queen, pointing to Alice: "Off with her head!"

These days, after the Winograd Report, and with the Prime Minister’s popularity hovering at a whopping 2-3%, I have to admit it: I miss the Red Queen. Who? you ask. Well, to either enlighten you or to refresh your memory, let me quote some fine excerpts from the renowned Lewis Carroll’s “Alice’s Adventures in Wonderland.”

…and, last of all this grand procession, came The King and Queen of Hearts.
Alice was rather doubtful whether she ought not to lie down on her face like the three gardeners, but she could not remember ever having heard of such a rule at processions; ‘and besides, what would be the use of a procession,’ thought she, ‘if people had all to lie down upon their faces, so that they couldn’t see it?’ So she stood still where she was, and waited.
When the procession came opposite to Alice, they all stopped and looked at her, and the Queen said severely ‘Who is this?’ She said it to the Knave of Hearts, who only bowed and smiled in reply.
‘Idiot!’ said the Queen, tossing her head impatiently; and, turning to Alice, she went on, ‘What’s your name, child?’
‘My name is Alice, so please your Majesty,’ said Alice very politely; but she added, to herself, ‘Why, they’re only a pack of cards, after all. I needn’t be afraid of them!’
‘And who are these?’ said the Queen, pointing to the three gardeners who were lying round the rosetree; for, you see, as they were lying on their faces, and the pattern on their backs was the same as the rest of the pack, she could not tell whether they were gardeners, or soldiers, or courtiers, or three of her own children.
‘How should I know?’ said Alice, surprised at her own courage. ‘It’s no business of mine.’
The Queen turned crimson with fury, and, after glaring at her for a moment like a wild beast, screamed ‘Off with her head! Off—’
‘Nonsense!’ said Alice, very loudly and decidedly, and the Queen was silent.
The King laid his hand upon her arm, and timidly said ‘Consider, my dear: she is only a child!’
The Queen turned angrily away from him, and said to the Knave ‘Turn them over!’
The Knave did so, very carefully, with one foot.
‘Get up!’ said the Queen, in a shrill, loud voice, and the three gardeners instantly jumped up, and began bowing to the King, the Queen, the royal children, and everybody else.
‘Leave off that!’ screamed the Queen. ‘You make me giddy.’ And then, turning to the rose-tree, she went on, ‘What have you been doing here?’
‘May it please your Majesty,’ said Two, in a very humble tone, going down on one knee as he spoke, ‘we were trying—’
‘I see!’ said the Queen, who had meanwhile been examining the roses. ‘Off with their heads!’ and the procession moved on, three of the soldiers remaining behind to execute the unfortunate gardeners, who ran to Alice for protection.
‘You shan’t be beheaded!’ said Alice, and she put them into a large flower-pot that stood near. The three soldiers wandered about for a minute or two, looking for them, and then quietly marched off after the others.
‘Are their heads off?’ shouted the Queen.
‘Their heads are gone, if it please your Majesty!’ the soldiers shouted in reply.
‘That’s right!’ shouted the Queen.

…in a very short time the Queen was in a furious passion, and went stamping about, and shouting ‘Off with his head!’ or ‘Off with her head!’ about once in a minute.
Alice began to feel very uneasy: to be sure, she had not as yet had any dispute with the Queen, but she knew that it might happen any minute, ‘and then,’ thought she, ‘what would become of me? They’re dreadfully fond of beheading people here; the great wonder is, that there’s any one left alive!’

‘A cat may look at a king,’ said Alice. ‘I’ve read that in some book, but I don’t remember where.’
‘Well, it must be removed,’ said the King very decidedly, and he called the Queen, who was passing at the moment, ‘My dear! I wish you would have this cat removed!’
The Queen had only one way of settling all difficulties, great or small. ‘Off with his head!’ she said, without even looking round.
‘I’ll fetch the executioner myself,’ said the King eagerly, and he hurried off.

…The executioner’s argument was, that you couldn’t cut off a head unless there was a body to cut it off from: that he had never had to do such a thing before, and he wasn’t going to begin at his time of life.
The King’s argument was, that anything that had a head could be beheaded, and that you weren’t to talk nonsense.
The Queen’s argument was, that if something wasn’t done about it in less than no time she’d have everybody executed, all round. (It was this last remark that had made the whole party look so grave and anxious.) 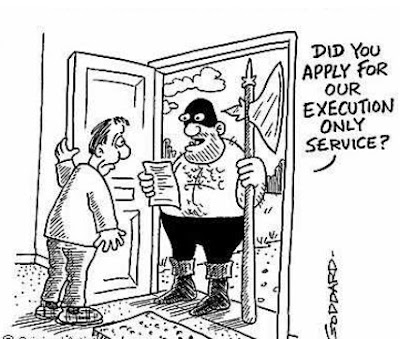 So what does this have to do with us here in Israel? It should be obvious by now that someone has to “lose his head.” Who, you ask again?

Well, let’s see what’s happened, so far. Halutz threw in the towel 3-1/2 months ago – he could see it coming.
Minister without Portfolio, Eitan Cabel of Labor announced his resignation from the Cabinet this morning (Tuesday), saying, "I can no longer sit in a government headed by Ehud Olmert." He read aloud the Winograd Commission findings naming Ehud Olmert as personally responsible for the failures of the Second Lebanon War.
About the others, it’s pure speculation, as rumors abound. For example, Peretz Might Jump Ship. But then again, don’t hold your breath, as Peretz said Last Year: 'I Know Nothing about Security'. According to Haaretz, it might be a matter of hours.

What about the wonderful unicorn called the Kadima Party? Kadima Looking at Options to Convince PM to Resign: Kadima Coalition Chairman Avigdor Yitzhaki as well as several other Kadima party members are quietly reviewing their options in finding a way to remove Prime Minister Ehud Olmert from office. Media reports said a majority of Kadima faction members have decided to back Chairman Yitzhaki’s call for Prime Minister Olmert to step down when the faction meets to discuss the situation on Thursday.
In fact, Hebrew websites are reporting that Yitzchaki has said that he would quit his position if Olmert doesn’t quit his.

Which leaves us with Ollie – and who can really tell? My bet is that he’ll try to stick it out, because Israeli politicos tend to stay glued to their seats, and never admit their mistakes. The question is what will it take for him to “draw conclusions,” as the expression goes. Meanwhile, of course, he’s continuing to oppress and attack the right, this time by calling for a new ‘outpost’ removal plan. Or as Arutz Sheva so eloquently puts it: Beleaguered Olmert Seeks Refuge, Plans to Uproot Yesha Outposts.