You don't have to go to Eastern Europe 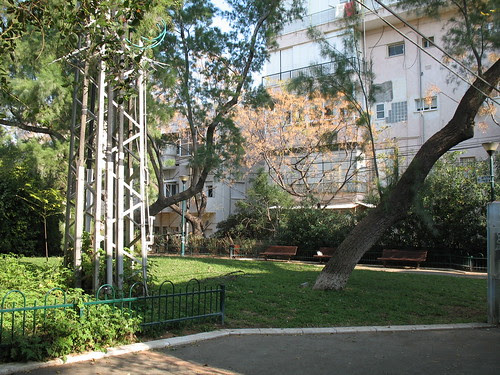 There are those who explain, or justify, the importance of visiting Eastern Europe because it's important to see the remains of a once strong Jewish community.

I had the same feeling this past Shabbat, but I was in Tel Aviv. Yes, Tel Aviv.

We prayed in a synagogue, a very large synagogue, large enough for hundreds to have seats. The acoustics were good, good enough for some of the best Chazanim in the world.

Our friend invited the Chazanim to lead the prayers in honor of his 80th Birthday, and it seemed to me that he was far from the oldest in his congregation.

Friday night the shul (synagogue) was pretty empty, but Shabbat morning there were plenty there to pray and enjoy the experience of world-class Chazanut. I couldn't take pictures on Shabbat and we left right after, so I couldn't return when it is permitted. So you'll have to make do with pictures of the park and front door. Yes, that's my husband. That large synagogue, Beit Knesset Ramah, is almost abandoned.

The Ezrat Nashim, Women's Gallery gives a great view of the downstairs where the men are, but many of windows are broken.

In general, things are old, though they don't look neglected. Important things have been repaired, like the toilets.

It must have had been decades since it was a full vibrant shul and community. The children and grandchildren of the original members no longer live in the neighborhood. Another part of the building has a Sfaradi (North African) synagogue which is more vibrant, since the younger generations live nearby. It's a sociological phenomena.

It's just off of 159 Ben Yehuda Street, Tel Aviv. Go through an alley, to the park, and you'll see the building on your left. It's open on Shabbat for prayers, Friday night just after candle-lighting and 7:45 am (if last Shabbat's time is standard) on Shabbat morning.

I would even suggest if someone is coming to Israel for a Bar Mitzvah or other occasion to contact the synagogue to pray there instead of in a hotel. It's a short walk to the hotels, commercial and residential Tel Aviv.

I would definitely consider it an important Tel Aviv landmark. 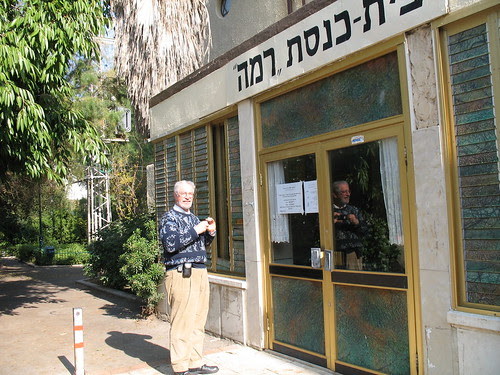