It used to be known that Israeli fashion was far behind all international standards, and that in Israel you could wear simple sandals to any event, summer or winter. So I wasn't that surprised when I noticed that a couple of the olim chadashim, new immigrants on the latest Nefesh B'Nefesh flight were wearing sandals. 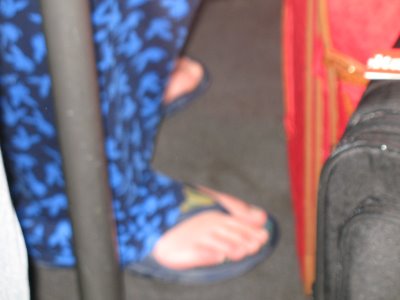 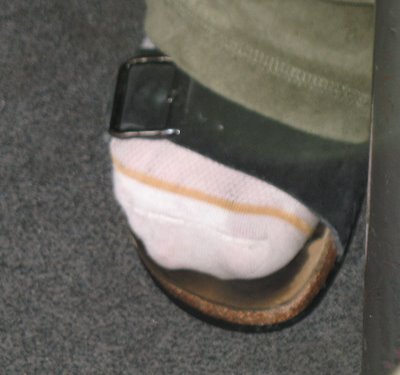 Yes, it's winter, and it was raining when they landed. I took the pictures on the bus from the plane to the terminal. My feet were cold, and I was in boots, so you can imagine how cold they must have been.

Thirty years ago, it was common to see Israelis in such sandals, even simpler ones, in the winter. Today it's rare, and the Israelis who dress like that have foreign accents.

Israel has become a very materialistic country, very nouveau riche. In this Friday's Jerusalem Post there's an article about picking out the perfect boots. The stores and brands the writer mentions ALDO, Kenneth Cole and Nine West are not for the frugal, even by the "Yuppiest" standards.

One of the big mysteries, which I haven't been able to solve in our 36 years here is:

How can Israelis afford it?

If Israeli incomes are as low as some people say, how do Israelis live so well?

Maybe we all just perceive everything differently. It's not just how consumer-oriented Israeli society is. It isn't just the frequency the "average Israeli" travels abroad.

And how is it that simultaneously we keep getting these terrible reports about rising poverty here in Israel.

Do we have two disconnected, unrelated societies?

Is this one of the reasons that "your average Israeli" didn't care about the thousands of fellow citizens who were forcefully exiled from their homes due to Disengagement?

Is this why they weren't outraged at the brutal police violence against Israeli children in Amona?

I have no idea who the young immigrants are whom I photographed as I tried to warm up after escaping the rain. I don't know what their plans are, where they're going or where they're from.

For me, their simple sandals and wet socks symbolize the idealism I still treasure. That's why I just had to photograph their feet.

I wish them luck in all of their endeavors, and even more than that. With G-d's help, they shouldn't lose their idealism, no matter what challenges they face.

Hi, long time since I had time to write you.

Do we have two disconnected, unrelated societies? Yes.

A) The statistic includes all Israeli children, including Arab, Druze, and Beduoin too which make up about 20% of the Israeli population. On top of that, add the Haredim. Now all four of these groups have lots of children (though the Arab birthrate is steadily sropping), and all four of these groups have different lifestyles than us 'modern Westerners'. The western statistics judge Israel as if it is a homogeneous group of people living in modern urban environments, while we all know that this is not true. For instance, there is such a big difference between the Bedouin family living in a tent only a few kilometres from the Intel plant in the south. Can both be judged with the same parameters?

B) What is this poverty level and who decided on it? An Arab family living below the level but 'getting by' is certainly much richer than a family below the Jordanian poverty level.

C) The haredim don't strive to amass material wealth or high-paying jobs, essentially, they aren't even in the 'game' and don't want to play by it. I respect their choice to earn the meager stipend of a yeshiva/collel boy and have the wife work part time in something else.

D) The last statistic I've seen is that over 50% of families are not in overdraft at the bank, contrary to what we all might think.

E) I am not denying that there are really poor people that need help, can be helped, and can ultimately be freed of that yoke with a lot of hard work on all of our part.

I agree with Josh. Statistics are misleading. The same nonsense regarding "children living below the poverty line" is a media favorite here in the States. A lot of those youngsters are living in households with a few TV sets, DVD players, Video game sets, two cars, etc. A grain of salt is the worth of such stats.

It reminds me of the times when the USSR used to film the inner-city poor in the USA, then air such sad film to their citizens. The watching USSR citizens tended to not sympathize so much with all these down-trodden inner-city US poor so much as envy them their TVs, refrigerators, cars, and so on. Typical Leftist lack of understanding.

No socks with sandals! No! Yech!

Thank you both for adding important info.
You're correct in that the truly poor who have to worry about bread is much less than the percentage stated. But they do exist. And you have lots of of people who struggle to keep up with the minimum.
I'm lucky to live in a place in which one doesn't feel pressure to keep with or pass the "Cohen's."

Don't get me wrong, the poor are certainly not faceless to me. There are people in my community who go through bad periods, some longer than others, and baruch hashem we (community) can help them get by until they pick themselves back up. There are others who have nothing in the fridge but still walk around smiling all the time.
Overseas, I learnt what chesed was all about, but only in Israel did I truly learn that the vague word 'gmach' can mean so many wonderful things.