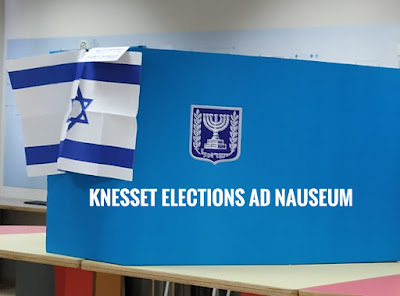 I've just renamed a Facebook page/group I run "Knesset Elections Ad Nauseum." It used to be "Knesset Elections, 2019." That title worded rather efficiently even for the useless redo elections we went through later in the year, but then I had to add 2020, when Ad Nauseum seemed more suitable. Polls, which are polls not elections, keep predicting "more of the same," which makes us Israelis feel rather sick. Things are running fine, so maybe we don't need a coalition.

But the truth is, I'd like to call the upcoming elections:


"I Want Ice Cream, But Not Ben & Jerry's Elections"

Do you know what this is based on?

I'm not sure of the source, but here in Israel, when you pass (run into) someone by chance the second time it's said:

So now, since we have elections scheduled for the third time in a year...


"you scream
I scream
we all scream for
ice cream"

But since the profits from Ben & Jerry's ice cream are used to support Extreme Leftist political causes, I'd rather starve than get theirs. I prefer Häagen-Dazs, which was established by Reuben and Rose Mattus who supported Jewish rights and communities all over. They even came to Shiloh in the early 1980s, where I met them.

Gevalt, what have I done? Now I'm craving Häagen-Dazs!
Posted by Batya at December 14, 2019

"Gevalt, what have I done? Now I'm craving Häagen-Dazs!
"

nonee, glad you enjoyed the post.
Ice cream is so much better than politics, especially Häagen-Dazs.