Drenched and Sick, Why Did I Vote in The Likud Primaries? 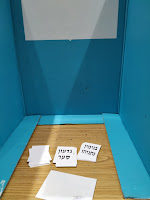 When I walked out of the house mid-morning to vote in the Likud Primaries, I thought that there was a break in the blessedly raining weather. To be safe, I wore a heavy winter coat and took an umbrella. Also the voting station wasn't far from the house, less than a ten minute walk...

Yes, you guessed it. It began to rain, but not too heavily. So I got to the voting station and voted. 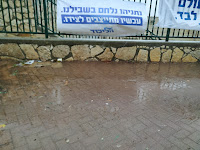 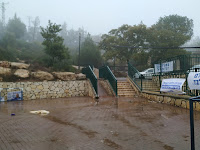 Unlike at other elections and primaries, none of the local activists were there schmoozing. In all honesty I had been counting on their being at the voting station. If someone had been there, I could have gotten a ride home. I needed a ride home, even though the walk up wasn't that far. The rain had gotten stronger. 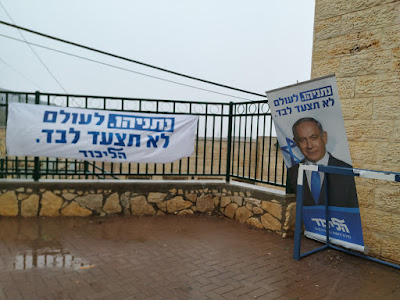 By the time I got home, I was soaked, feeling sick and totally miserable.As you can see from the picture, my coat and skirt were both soaking wet. Water even snuck in through the top of my waterproof boots. Yes, it was raining that hard. I had to change pretty much everything; that's how wet I had gotten.

Now, I still don't know who won, Bibi Netanyahu or the "challenger," Gidon Saar. I wasn't happy about Sa'ar's forcing these primaries before getting soaked in the rain. And now I'm even angrier.

If Sa'ar loses, not only has he added fuel to Blue & White's campaign against Likud, but he wasted money and made me sick.

I think Saar's timing was terrible - and am not enamored of him in any case. But I don't see that this benefited Blue and White in anyway. If anything, I think his win by such a large margin has strengthened Netanyahu's position, and not only within the Likud, by democratically showing that people still want him as leader.

I hope you're right. My cold got much worse after going, so I'm really sore....