Coalition Politics: How To Banish Avigdor Lieberman to The Sidelines

There are many dimensions to the political situation present in Israel right now. On one hand I agree with the various opinions of Arlene Kushner, Caroline Glick and Ruthie Blum.

But last night as I was falling asleep, I suddenly had the solution to the Avigdor Lieberman problem. He has evolved or devolved from a strong Right wing Likud activist politician to a dangerous political anarchist, who gets his kicks from breaking up government coalitions and driving most everyone crazy. Inexplicably he has enough followers to keep him in the Knesset with sufficient MKs to stymie every possible coalition. Avigdor Lieberman wants to be the kingmaker and Prime Minister. I've come up with a way to lock Lieberman out of the government.

It's pretty obvious, once you think about it. Of course it's based on a shaky double "if."

If both Gantz and Bibi really want to avoid another useless round of Knesset Elections...

If both Gantz and Bibi really are sick of Avigdor Lieberman's dangerous political games... 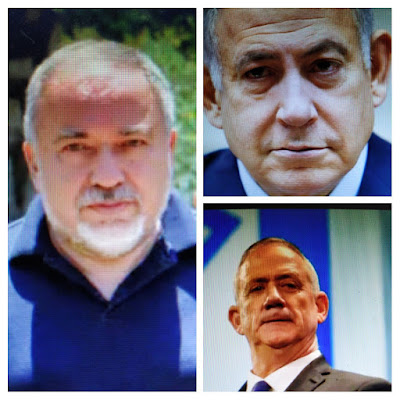 Likud's Binyamin Netanyahu and Blue & White's Benny Gantz do no need Avigdor Lieberman to form a broad coalition together. Both parties got over thirty 30 seats in the last elections. Together that's the majority needed to form a government. Both of them can say that:

That's it. That's what most Israeli citizens really want.

Can someone please send them the message ASAP...