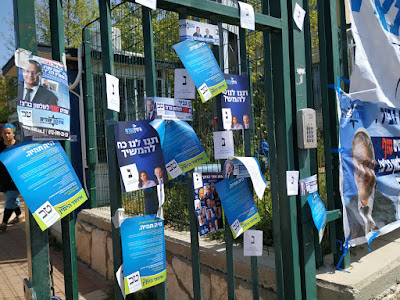 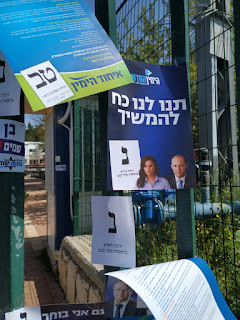 Let's make it clear. I was never a Moshe Feiglin fan. How many of his diehard fans will really follow him back to Likud?

If you haven't heard. Prime Minister Binyamin Bibi Netanyahu has offered Moshe Feiglin a cabinet post if he'd agree to close down his political party and not run in the upcoming elections. Since Feiglin hadn't a chance to get into the Knesset, and his funds/donors have been drying out, he took the deal.

Feiglin missed out on getting into Knesset in the elections a few months ago, and polls have been showing that he'd do worse this time. By running again, he would have wasted one or two Knesset seats. The Zehut voters will probably go to a variety of political parties, to the Likud and further Right.

On the whole, this has been a rather pathetic "election season." That's no surprise, since Israel has been in "school vacation" mode since the end of June. Sunday, September 1 schools will reopen, Gd willing, and then, since it will also be Rosh Chodesh Elul, we'll enter "before the chaggim/Holidays" mode. Elections are scheduled for before Rosh Hashanah, a time when people are shopping, cooking or planning more vacations.

"None of the above" seems to be a very popular voting choice this time around. The winning parties, don't forget that Israeli Governments are coalitions," will be the ones that manage to convince their supporters that Election Day is for voting, not vacationing. You don't have to be a top notch pundit to predict that voter turnout will be awfully low. The Redo Knesset 2019 Israeli Elections have turned more Israelis into apathetic cynics.

Gd willing we will have a good viable, strong government when this round of voting is over. 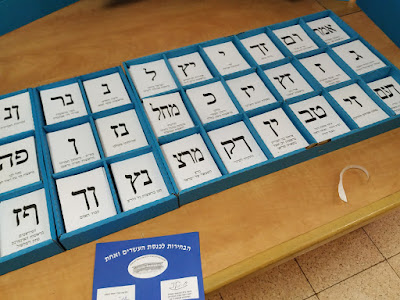 Israel must reduce the number of hostile
foreign news reporters who work in Israel.

News reporters who tell lies about Israel
must be: placed on trial, thrown in jail,
and permanently banned from entering Israel.

News organizations that consistently show
a hostile bias against Israel must be
permanently banned from Israel, starting
with the NYT and BBC.

On June 1, 2006, former New York City
mayor Ed Koch wrote an opinion piece
in the [New York] Times titled
“The New York Times’ Anti-Israel Bias,”
asserting that “the British Broadcasting
Corporation [BBC] and the New York Times
consistently carry news stories and editorials
that are slanted against Israel and sympathetic
to the Palestinian Authority and Hamas.”

ALL EUROPEAN LIFE DIED IN AUSCHWITZ
by Sebastian Vilar Rodrigez

I walked down the street in Barcelona,
and suddenly discovered a terrible truth:

We killed six million Jews and
replaced them with 20 million Muslims.

In Auschwitz we burned a culture of thought,
creativity and talent. We destroyed the
chosen people, truly chosen, because
they produced great and wonderful people
who changed the world.

The contribution of this people is felt
in all areas of life: science, art,
international trade, and above all,
as the conscience of the world.
These are the people we burned.

And under the pretense of tolerance,
and because we wanted to prove to ourselves
that we were cured of the disease of racism,
we opened our gates to 20 million Muslims,
who brought us stupidity and ignorance,
religious extremism and lack of tolerance,
crime and poverty, due to an unwillingness
to work and support their families with pride.

They have turned our beautiful Spanish cities
into the Third World, drowning in filth and crime.

Shut up in the apartments they receive
free goods and services from the government.

They plan the murder and destruction
of their naive hosts.

And thus, in our misery, we exchanged
culture for fanatical hatred, creative
skill for destructive skill, intelligence
for backwardness and superstition.

We have exchanged the pursuit of peace
of the Jews of Europe and their talent
for hoping for a better future for their
children, their determined clinging
to life because life is holy, for those
who pursue death, for people consumed
by the desire for death for themselves
and others, for our children and theirs.

What a terrible mistake was made by miserable Europe.

“Some people like Jews and some do not,
but no thoughtful man can doubt the fact
that they are beyond all question the most
formidable and the most remarkable race
which has ever appeared in the world.”

“The thought, the inspiration and the culture
of the Jews has been one of the vital dominants
in the world history.

There are none of the arts or sciences which
have not been enriched by Jewish achievements.”

There were nations of hundreds of millions
of people who had been unable to produce
a single Nobel Prizewinner, “and are the beneficiaries
every day from the genius and discoveries of the Jews.”

In March 1921, Sir Winston Churchill
said to the Arabs of Haifa:

“It is manifestly right that the scattered
Jews should have a national centre and
a national home in which they might be
reunited, and where else but in Palestine,
with which the Jews for 3,000 years have
been intimately and profoundly associated?”

“I refuse to bend over backward to
single out Israel – or other things Jewish
– for super-scrutiny. I refuse to gloat,
as so many in academia and the media
seem to, over Israel’s shortcomings.”

“The Jewish people are optimists,
addicted to a passionate belief that
they cannot possibly have enemies
bent on their destruction.”

What Palestinians DON'T Want YOU to Know
by Hananya Naftali: