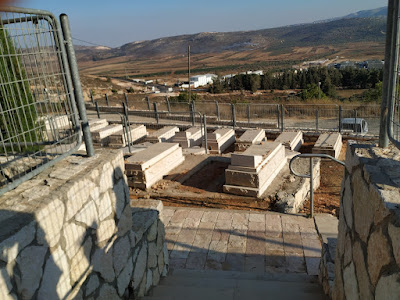 Way back when almost everything done in Shiloh was done by volunteers, I spent some amazing years on the Vaadat Klita, the committee that accepted and rejected and recruited new residents for Shiloh. I was truly privileged to have been on that committee when Soviet Aliyah was at its peak, and the masses of olim chadashim from the USSR were looking for new homes and lives in Israel.

This week I was reminded of those exciting days; I was very moved to hear how some of those now veteran immigrants remember me.

When I realized that I'd be home at the time of an Azkara, memorial ceremony at the grave of a neighbor who died a couple of years ago, it was obvious to me that I had to attend. The first of that clan came to Shiloh as a young married expectant couple looking for a clean, unpolluted healthy Jewish environment to raise their family. I was on the committee at the time, and we welcomed them joyfully. Soon they were joined by a newborn plus two more older generations and siblings.

As time went on, the young families left, and the older ones stayed on in Shiloh. At the cemetery, surrounded by young children, they talked about how much Shiloh means to their family and how glad and grateful they are to have been welcomed here.

We reminisced about the time when they first came to Shiloh. According to the normative criteria aka our standard instructions, almost none of the Soviet olim, immigrants "fit in," but we just couldn't turn them away. It felt wrong. So we consulted with the community rabbi who gave the perfect psak, answer according to Jewish Law and human nature:


"Accept all who want to live in Shiloh. Those who should be here will stay, and the others will leave when they're ready. It's important to show them full acceptance in their difficult adjustment period."

And that's what happened. Some stayed and some left. And quite a few of the elderly will be here until Redemption, since they are buried in our cemetery.

Later that evening I paid a shiva call to the family of another family of Soviet olim. Here too the first to come to Shiloh was a young family, followed by the older generation who have been the only ones living here for years already. The mourner was very happy to see me and told the now adult children that if it hadn't been for my support they most probably would never have been accepted to live in Shiloh. Again I told the story of what the rabbi had instructed us.

I was so touched. It had never occured to me that anyone found my efforts unforgettable and worthy of praise and thanks.

In my teenage years I had been very active in SSJ Student Struggle for Soviet Jewry, and my helping the olim settle in Shiloh was a miraculous way to continue the dream. In the 1960s if someone had told me that hundreds of thousands Soviet Jews would be in Israel, and I'd be helping them in Shiloh, I'd have trouble believing it possible. But miracles happen.
Posted by Batya at 2:16:00 PM

What beautiful words from your rabbi! I am so happy you had the opportunity to be part of this mitzvah. I hope with all my heart we will be able to be part of the same ingathering of the last of the Ethopians still stranded in Addis Ababa for the 20+ years it has taken the Israeli government to fulfill its promise. May it be soon!

Thanks Ruti. May all Jews come to Israel, bimhaira biyameinu, speedily in our days, and we will all take part in welcoming them. There is a home here for all.

"It had never occured to me that
anyone found my efforts unforgettable
and worthy of praise and thanks."

Many years ago, I attended a lecture
in which the speaker, an elderly woman
who called herself a Life Coach, said that:

"Most people go through their lives
without knowing the effect that their
actions have on the lives of other people"
[or something very similar to that].

May it be the will of the All-Mighty
and Eternal G*D-OF-ISRAEL
to have mercy on me, and grant me that
all my actions should always have
good-and-positive effects on other people,
and I should never harm any innocent person.

The G*D-OF-ISRAEL is the ONLY
true god -- all of the gods of the Gentiles
are false, fictional, and futile.

If you want the truth about Israel
and the Middle East, then do not waste
your time with the FAKE NEWS
of The New York Times and the
Israel-bashing mainstream-news-media.

In 1958, former director of UNRWA Ralph Galloway
declared angrily while in Jordan:

“The Arab states do NOT want to solve
the [Palestinian] refugee problem.

They want to keep it as an open sore, as an affront
to the United Nations, and as a weapon against Israel.

Arab leaders do not give a damn
whether Arab refugees live or die.”

SOURCE: From Time Immemorial:
The Origins of the Arab-Jewish Conflict
over Palestine (chapter 2, page 23)
by Joan Peters, year 1984, JKAP Publications

“Under the Trump administration,
the United States argued that UNRWA
[United Nations Relief and Works Agency
for Palestine Refugees] has perpetuated,
rather than helped end, the Israeli-
Palestinian conflict, by extending
refugee status to the: children,
grandchildren and great-grandchildren
of those who fled Israel during the
establishment of the Jewish state in 1948.”

Yes, we have returned to the Holy Land.