It seems that Donald Trump let his son-in-law Jared Kushner talk him into a stupid, useless and inevitably dangerous policy, presenting an Israel-Palestinian "Peace Plan." The term is pure oxymoron for sure. The so-called Palestinians sic have no desire for peace. They were invented to terrorize and abort a Jewish State by the British.

This fiction of a "nation," which has no history is the "pet" of innumerable countries, NGOs, media, celebrities etc.

Early on in Donald Trump's career as a politician, he had announced that it was up to the two opposing sides, Jews and Arabs, to negotiate. Too bad he didn't stick with that policy.

It doesn't matter how creative or practical or revolutionary the "peace deal" Kushner and co have come up with, it won't bring peace to the middle east. And they should know perfectly well that a "deal" can't be imposed from outsiders.

These same Arabs that celebrate murder of innocent Jews will not change their deadly cruel culture for anything. They still, supported by the EU, UN and too many others, educate their children to kill, and until this changes and takes effect, there's no chance for peace.

Gd willing, some day there will be true peace, but that will only come when the State of Israel fully annexes all of the Land of Israel and executes all Arab terrorists. 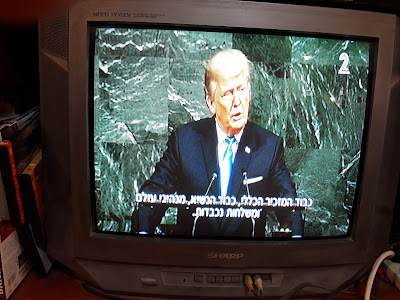 Why Don't You Support Israel?

Gd willing, some day there will be true peace, but that will only come when the State of Israel fully annexes all of the Land or Israel and executes all Arab terrorists.

Thank you for actually coming out and stating this - if only it was heard more often.

And thank, in general, for all your valuable work at this site (since I think this might be my first time commenting here).

Jerusalem was only destroyed because
they desecrated SHABBAT there…

Jerusalem was only destroyed because
Torah Scholars were despised in it.

When a man breaks his desires and his will,
for the honor of G_D, in order to perform His Will,
G_D gives him what he wants.

The poor bear the punishment for the sins of their generation.

Another reason to donate to the poor is that:
[Sometimes] those who do not donate the amount that
is appropriate for them, are punished with death by G_D.

When a child is born, a parent feels SIMCHAH,
but after that, his child brings him GILAH each day.

jonathan w, thanks so much
Mr. Cohen some of what you write isn't clear.