Will Bibi Pull The Rabbit Out of The Hat? 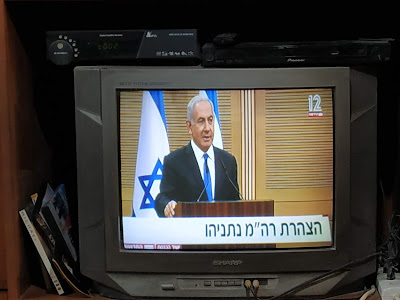 Tonight Prime Minister Binyamin Bibi Netanyahu made a short speech, and he didn't stay for questions. He didn't even turn his head in the direction of those shouting questions. He said there is still time to prevent new elections if Avigdor Lieberman would be willing to join the coalition.

Lieberman seems to want some of the Blue & White votes, so he's going rabidly against Netanyahu. Leberman is betting that he'll do better in new elections.

If we really are going to suffer through another round of elections, no doubt they'll be even nastier more childish than the previous ones. There was one basic issue in those, pro-Bibi or anti-Bibi. The antis, especially the Gantz-Lapid-Bogie-Ashkenazi Blue & White insisted that they could do a better job at running the country, because... they're not Bibi. They never really got down to basics on how they'd make the State of Israel better, safer etc. They did not appear competent. They didn't have very detailed or well thought out policies or plans. They just didn't want Bibi. And the parties to the Left of them, like Labor, wanted their votes, so they campaigned that Blue & White was Right. Likud campaigned that Blue & White was Left. While Blue & White just kept hammering it in that they're not Bibi.

I shudder to think of what the next election campaign will sound like.

I have a rather revolutionary idea. The top four of each party elected to Knesset must resign, leave politics and let the lower numbers get in and take over. Maybe they can form a good working coalition for the good of the country, instead of just increasing hatred.

Prime Minister Benjamin Netanyahu is not flawless;
nobody is flawless; there are no perfect people.

I am hoping that he stays in power,
even though he is flawed, because I
fear that anyone who replaces him
will be worse for Israel and Jews.

PS: This is the ONLY
Facebook Group whose theme is that
a specific newspaper hates a specific nation.
Think about that!

Why Don't You Support Israel?

amen
I hated the campaign and the results were worse.