Gantz & Co Folded Without a Fight

The Blue & White Party led by Benny Gantz and Yair Lapid officially conceded the 2019 Knesset Elections to Likud- Binyamin Netanyahu. I kept hoping that he'd say something about waiting to hear the final tallies after the double-envelope votes are counted, plus surplus distributed. I guess Gantz and crew are awful Poker players. They'd lose to Bibi in Chess, too.

Am I crazy to feel this way? I voted New Right, and we won't know for sure if they're really out in the cold until all the double-envelope votes are counted. Gantz & Co had been played up, promoted like they could beat Cassius Clay, but they ended up like a Woody Allen character, but in real life.

I had been hoping for more drama and excitement. The hype was so stupendous. Think about it. On paper, this shouldn't have ended so blahh.

Three top generals, who had been IDF Chief of Staff and a media star versus the professor's middle son. You'd think it would be a piece of cake for them. Now, granted that the professor's kid had been in a top commando unit, but against three GENERALS?!

It seems that being the middle of three sons can make one pretty tough, too. 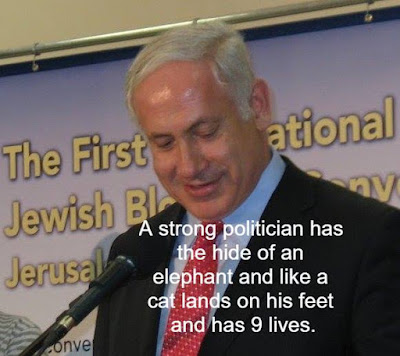 Now Bibi, Trump has already moved the United States Embassy to Jerusalem and recognized the Golan as Israel, so we expect you to immediately annex, declare Israeli Sovereignty on Judea, Samaria and the Jordan Valley, at least all of Area C. Don't forget to destroy all the illegal Arab buildings up there, including those funded by the EU and any other foreign bodies.
Posted by Batya at April 10, 2019

Just a view from the US but I'd say many people went with the devil you know rather then the one you don't know. How would Gantz and friends actually perform? In perilous times you don't want someone learning as they go.

The unknown, inexperienced novelty party always does well. I didn't vote for his party and consider them incapable of running the country. Proof is how he folded, which was such a quick boring end. There's a good chance that most of them will lose interest completely. They're not in for the long run.
There was some satire in my writing.

It sounds to me, from what I've been reading, like Bibi intends to at least keep all the Jewish communities, with no more expulsions. But if he continues to be as smart as he's made out to be, he will quickly realize that protecting only the Jewish communities in the occupied-by-Arabs territories is not enough. He will have to extend Israeli law over the entire swath of land.

It also looks like the New Right may yet make it over the threshold...hang in there.

HDG annexation is part of the process. In Olam Hazeh, this world we have to use recognized terminology.

Batya, you may be showing your age. (Or you're not a boxing fan.) I think you probably are confusing people who might not know "The Greatest's" birth name. Of course, I refer to Muhammad Ali. (I am old enough to remember when he was known as Cassius Clay.)

Sorry, I couldn't help myself...

It's OK, yes, showing my age. I hope you liked the humor. One would expect the professor's boy to be nerdy. Right? When Gantz tried to mock Bibi as going to the states after the army to learn/polish his English, he showed that he's an idiot. Bibi came by his English legitimately, having been raised in the states, including high school and then later on university.