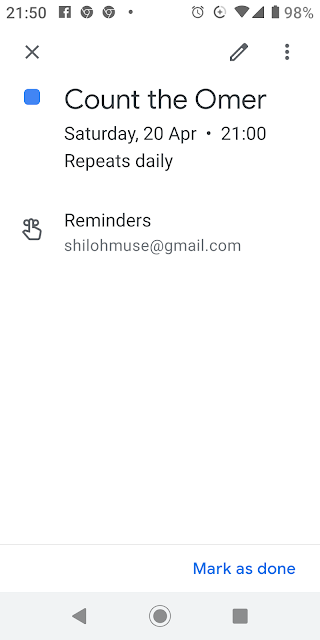 There's along running mitzvah in Jewish Life, Counting the Omer, Sefirat Haomer. We're supposed to do it from the second night of Passover until just before Shavuot, seven weeks, forty-nine days, though it's done at night.


In the days of the Holy Temple, the Jewish people would bring a barley offering on the second day of Passover (Leviticus 23:10). This was called the "Omer" (literally, "sheaf") and in practical terms would permit the consumption of recently-harvested grains.

Starting on the second day of Passover, the Torah (Leviticus 23:15) says it is a mitzvah every day to "count the Omer" – the 50 days leading up to Shavuot. This is an important period of growth and introspection, in preparation for the holiday of Shavuot which arrives 50 days later.

Shavuot is the day that the Jewish people stood at Mount Sinai to receive the Torah, and as such required a seven-week preparation period. The commentators say that we were freed from Egypt only in order to receive the Torah and to fulfill it. Thus we were commanded to count from the second day of Pesach until the day that the Torah was given – to show how greatly we desire the Torah.  Sefirat Haomer complete article

For the first thirty-five years or so when I was trying to get into the swing of being a Torah Observant Jew, Sefirat Haomer was my greatest failure. Not once did I succeed in counting the full 49; I never even got close.

The first time I succeeded in Counting the Omer was when someone signed me up for phone message service. After that I began setting up my phone to send me a message every night. Actually, even though the count starts Saturday night, after Shabbat, I've already programed my phone. See the screenshot above. 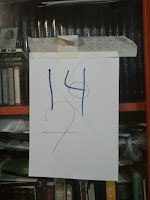 My phone is fine most nights, but not Leil Shabbat, Sabbath Eve and the last night of Passover. Then I put up a sign across from where I sit, when my husband goes to synagogue. Bli eyin haraa, not to tempt the evil eye, it has worked so far.

For weeknights, I go high tech, and for Shabbat, I stick with low tech. Gd willing, this year will go well.

I hope this helps you.

May the G*D-of-Israel have mercy on His people,
and help all of them to walk the straight path
of righteousness, to obey all of His commandments
correctly and enthusiastically and happily, always.

May the G*D-of-Israel have mercy on His people,
and grant all Jews a very happy and kosher and
peaceful Passover, this year and every year.

At a [year] 1937 [CE] lecture to
the British Foreign Ministry,
the King of Saudi Arabia said:

“Verily, the word of Allah teaches us,
and we implicitly believe this…
for a Muslim to kill a Jew…
ensures him immediate entry into Heaven…”

Notice that those words were spoken BEFORE
year 1967 CE and BEFORE year 1948 CE.

“I cannot defend this land [Israel] without
that terrain [the West Bank]...
Without the West Bank, Israel is only 8 miles wide
at its narrowest point. That makes it indefensible.”