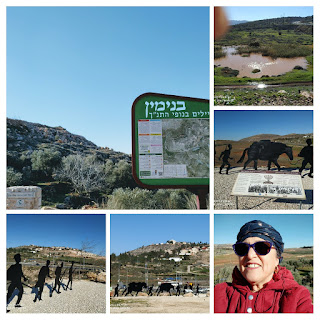 Yesterday one of my walking partners called and suggested that we take a walk to see streams of water at the Shiloh Junction. Her timing was great, and I was able to take a break from my Shabbat cooking to join her.

Since our time and walking prowess are rather limited, we took her car to the Shiloh Junction and walked across the road to the Shiloh Valley park and hiking trail. It has also been dedicated as the Jewish Legion in Binyamin Memorial.

During World War One, the first Jewish fighting force was established, the Jewish Legion, and one of the areas it got to was Shiloh. So, last summer a memorial was set up at the Shiloh Junction. 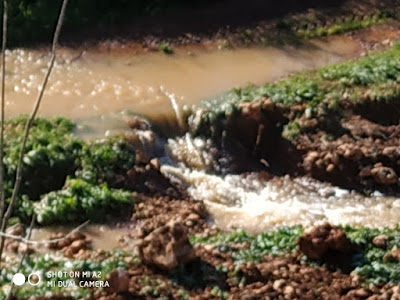 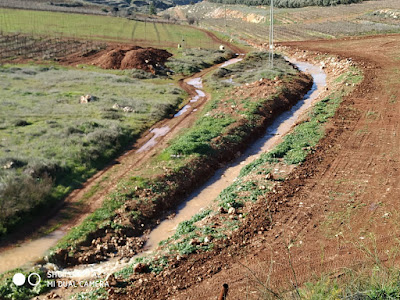 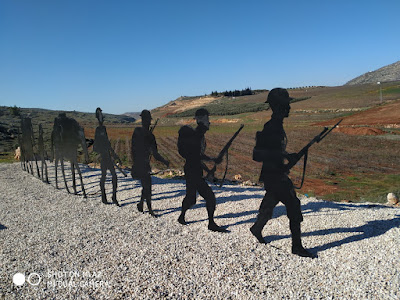 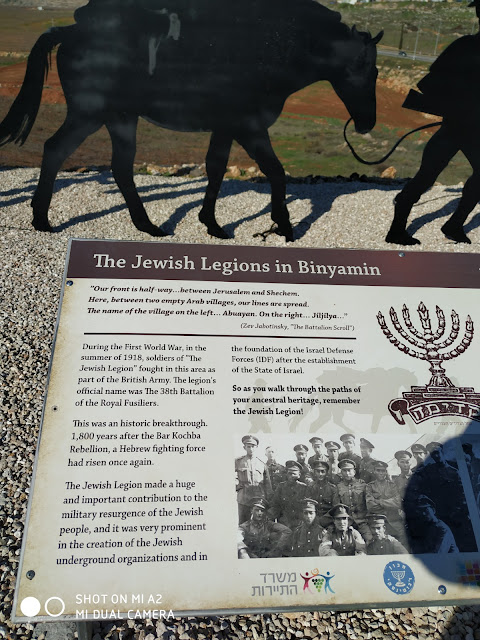 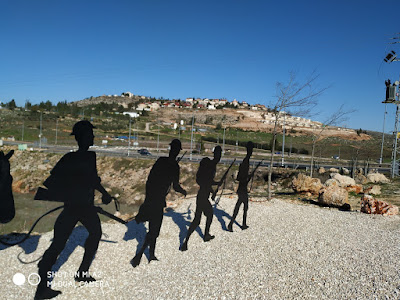 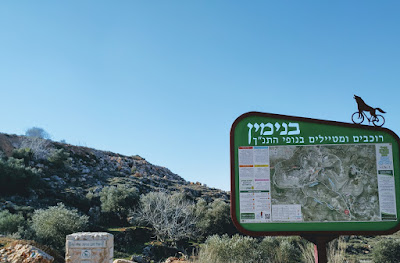 Today, the area just west of Shiloh is a Jewish agricultural area with olive groves and vineyards. Since it's part of the Emek Shiloh, Shiloh Valley, it's extremely fertile. When we came to live in Shiloh in 1981, the entire area was barren. But in the past twenty years, this area has been one of the most profitable agricultural sites around. Prize-winning Meshek Achiya Olive Oil grows olives here, and a number of prize-winning wine companies get their grapes from here, too.

Experts can taste the difference between rain-watered produce and artificial irrigation, so the accumulation of rainwater here is very important, Baruch Hashem, thank Gd.

Only under Jewish rule has the desert been
transformed into trees that produce edible fruits.

Even the Muslims speak to each other about this.

In 1958, former director of UNRWA Ralph Galloway
declared angrily while in Jordan:

“The Arab states do not want to solve
the [Palestinian] refugee problem.

They want to keep it as an open sore,
as an affront to the United Nations,
and as a weapon against Israel.

Arab leaders do not give a damn
whether Arab refugees live or die.”

SOURCE: From Time Immemorial:
The Origins of the Arab-Jewish Conflict
over Palestine (chapter 2, page 23)
by Joan Peters, year 1984, JKAP Publications

Galloway's comment- along with more recent substantiation- bears repeating on occasion. Too many people who think they know something about the history of modern Israel are unaware of this dynamic..