Last night before 8pm Israel Time, I hurriedly tried to find a link to listen to Prime Minister Bibi Binyamin Netanyahu's "important announcement." About a week ago, there had been a similar situation from Naftali Bennett, and that's when he and Ayelet Shaked told us all that they were leaving NRP-Jewish Home and officially starting their own political party.

So, unlike those on facebook who were making jokes out of Bibi's possible "news," I thought maybe he was going to announce that a dynamic, charismatic vote-getter would be joining Likud.  I was wrong. A very tired and uninspired looking Binyamin Netanyahu just kvetched that the "judges were against him." He wanted the opportunity to confront his accusers. To be honest, knowing my criminal law more from American television, than anywhere else, I agree with him. But I don't see this as suitable material for a big public announcement. 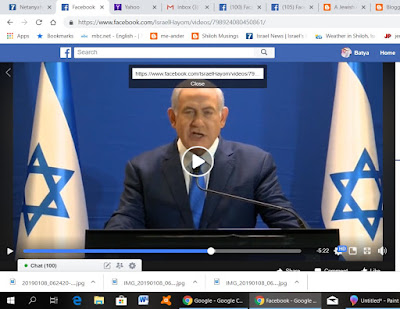 How many times had he been called in and interrogated by the police? This wasn't a chance to tell his side of the stories?? And if we choose to believe him, he has nothing to say because there is nothing. This dramatic announcment was a big nothing.

“I hate elections in Israel,
because they pull Jews apart”.

“In other cases the more or less universally
used description of eligibility [for refugee
status] included people who were forced to
leave permanent or habitual homes.

In the case of the Arab refugees,
however, the definition had been
broadened to include as refugees
any persons who had been in Palestine
for only two years before Israel’s
statehood in 1948.”

SOURCE: From Time Immemorial:
The Origins of the Arab-Jewish Conflict
over Palestine (chapter 1, page 4)
by Joan Peters, year 1984, JKAP Publications

Joan Peters is a former CBS news producer
of documentaries. She also wrote for magazines
such as: Harpers, Commentary, The New Republic,
and The New Leader.

Her original goal was to gather evidence
that the Palestinians were driven out
of their land by Jews; but when she
examined the facts, she realized that
the people who call themselves Palestinians
are not native to Palestine, and have
no legitimate claim on the land of Israel.

Considering the years, efforts and worse that have been wasted trying to find something illegal, maybe they should give up and declare Bibi innocent.