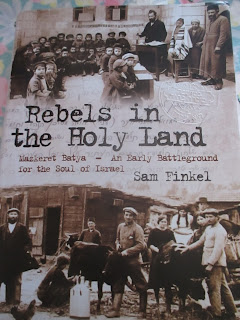 This isn't a book review, because I haven't yet finished reading the book. I'm writing first impressions on the historic period.

I've just begun reading Rebels in the Holy Land, by Sam Finkel, which is about the "First Aliyah." The First Aliyah, which took place in the late nineteenth 19th century, predated the more well-known secular aliyah to kibbutzim which is called the Second Aliyah. That was with the advent of political Zionism which began in earnest after World War One. 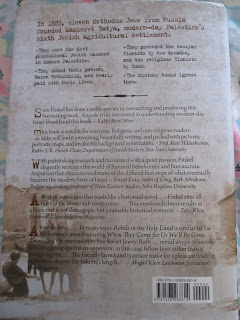 The First Aliyah was mostly religious Jews from Eastern Europe and paved the way for those who established kibbutzim and all olim, immigrants to Israel, including myself who came to Israel in 1970 and even those who arrive now.

Considering that I've only read a couple of chapters of Rebels in the Holy Land, I'm just in awe of those amazing and daring pioneers. It wasn't just the difficult physical conditions here in the Holy Land. Communication was almost impossible, and what there was took ages. The Ottoman Turks were if anything even more anti-Jewish than the British who occupied the Land after them. Poverty, disease and terrorism were rampant.  But still, almost incomprehensibly, there were idealistic Jews who were willing to brave it all and build new lives as farmers in the Holy Land.

Barely a dozen Jews left their families to start a farming community in the Holy Land. The plan was to send for their families after their farms could sustain them all. Promised financial support fizzled even before they left, but they didn't back out.

This group went on to establish the town of Mazkeret Batya which exists until this day. I don't think that I've ever been there, but I do know people who live there.

It's hard to put myself in the mind of people who lived a century before my own. Their aliyah to establish a farming community in the Holy Land was close to a hundred years before my own aliyah. In some ways, it was difficult enough in 1970, when there were few phone lines in Israel, and calling overseas was prohibitively expensive. Such calls were reserved for special occasions only. And at least we had the option to send letters airmail, which generally took five to ten days between Israel and New York. Mail at the time of the First Aliya could take months or get lost at sea.

Finkel tells us of how there wasn't enough money, the constant begging for more, the distances the potential olim had to walk carrying their belongings. Yes, all that they had with them was a bag. Today people can't imagine making a move without shipping enormous quantities of possessions. But those pioneers owned little. They were very much like the Jews who fled Egypt with Moses.

By the time we came to Israel, modern medicine was the standard, and most of the "third world" diseases, which had been rampant here, had been eradicated. Young people and today's olim compare my conditions to today and are horrified at how we lived. Much has changed in the last half century, but I think the previous century saw even more radical change.

Gd willing I'll be blogging more about Rebels in the Holy Land, so stay tuned.
Posted by Batya at August 13, 2017

My belief is that additional possessions and
technological advances do not bring happiness.

I believe that the key to happiness is
VeAhabta LeReacha Camocha;
people being careful to not hurt each other
in any way, people caring about each other
and loving each other.

Many people do not truly love anyone
except their own children and grandchildren,
and that is the path that leads away from happiness.

How to Pray for Tzahal-IDF:

There's a big difference between being forced to walk miles, or all those to Jerusalem put on a bus from Haifa Port, like me and my husband, or getting a free taxi ride to wherever like my father got from the government.