Of course we don't know the backstory to Elvis Presley's iconic song, "Return to Sender," which makes the singer into a victim.  This morning when I checked some news sites to get an idea for a topic to blog about, I saw that United States President Donald Trump is trying to raise his "approval ratings" at Israel's expense by hoping his hapless staff can do what no other has done before, broker a peace deal between Israel hand her sworn enemies.

In my long and intamate half century acquaintance with the reality of the State of Israel, its history, security problem and day to day living, its pretty obvious that the only thing that peace talks ever ignite are terror death and war. 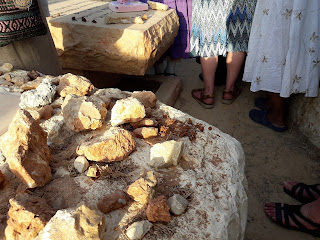 Just a few days ago, I was at the local Shiloh Cemetery for the funeral of an old man, who had davka died of "natural causes," but many of those buried there were the victims of Arab terrorism. That includes the very first body, the one that resulted in the opening of the cemetery. That was Rachella Druk, HaYa"D, a young mother of seven who had been murdered by an Arab terrorist on the Eve of the Madrid Peace, sic, Conference.

Other terror victims in our cemetery are Avihu Keinan, Shmuel Yerushalmi, Noam Apter, Yehuda Shoham... They were all so young, leaving grieving parents, siblings, other family members and friends. We mourn them...

Terrorism is a result of a very dangerous and sick society and culture. Europe is now beginning to recognize that it, too, is a target. I haven't heard of anyone insisting that the Spanish Government negotiate with ISIS or whatever group is behind the recent terror attacks there. There's no "deal" any government can make to placate terrorists, no matter how impressive the ceremony.

The Arab Muslim world glorifies terrorism, praises and rewards the terrorists and their families. And the Western World excuses them and supports many of their claims, which is the situation here in Israel. This must stop for there to be peace. It is much too widespread for "negotiations," and as we all see in the news, it's not isolated here in Israel.

Arab terrorism must be defeated and not negotiated with!
Posted by Batya at August 23, 2017

Jews Are the Eternal Enemies of Muslims
Regardless of the Occupation of Palestine:

"The Hour will not be established
until you fight with the Jews,
and the stone behind which a Jew
will be hiding will [miraculously] say:

"O Muslim!
There is a Jew hiding behind me, so kill him!"

Islam Teaches that Jews are Apes and Pigs:

Notice how these Islamic teachings are NEVER
mentioned in the mainstream news media
because they give the wrong message:

How Torah Can Defeat Terrorism

(based on the teachings of Rabbi Nachman of Breslov ZYA)

There is only one answer to the political movement of suppression under the guise of a religion called Islam. Annex the Land and implement Israeli law throughout, expel PLO/FATACH. Arabs who want to live as decent humans in a Jewish state will receive ONLY permanent residence status. Arabs who do not want to live in a Jewish state will receive humanitarian help to relocate to a sponsoring country. Those who refuse those standards will be dealt with by the IDF. For this to actually happen, we need the correct leaders who are not concerned about pleasing the goyim. We have to decide and create our destiny. Currently we have no one in the gov't who can do this and for certain no one within the rabbinut and system who have defanged the Jews for 2200 years now. We have to think outside the box like the leaders of old who actually did change history for us.

It was aok until you got to a bissel theology.