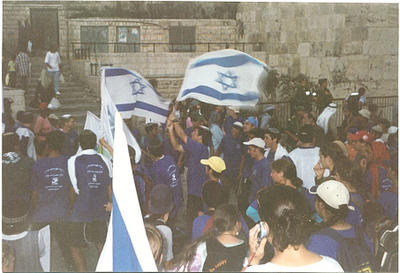 Now for the Third Time

In just over a week, on Sunday, October 23, during Chol Hamoed Succot, G-d willing I’ll be attending the third annual “Od Avihu Chai” Memorial March from Shiloh to Jerusalem. Unlike the very first year, less than three weeks after my neighbor, Avihu Keinan, was killed in a badly planned army action, we won’t be marching the entire route by foot. Last year, due to army pressure, we were bussed part of the way, and even though it was disappointing, I must admit that it still was a glorious experience.

Two years ago Moshe, Avihu’s father, led us to Jerusalem and not even the army could stop our advance. We ended our march outside the President’s Residence, and a succah was quickly constructed. It was during the Succot holiday and Moshe spent his days in that succah meeting with people. Some were famous politicians, and some were other bereaved parents and some were just ordinary Israelis and tourists. He explained to all who came how the army followed a false, a perverted morality that valued the enemy over the lives of our soldiers, our sons, brothers, cousins, fathers and friends.

Since then Moshe has continued his mission to try to bring some sanity to the Israeli psyche. He has become a symbol of a father who fights for the lives of Israeli soldiers, even after his son is dead.

Last year we marched to the “Kotel,” the “Western Wall,” in the Old City of Jerusalem. We entered via Sha’ar Shechem, the Damascus Gate. At the gate we stopped marching and danced and sang, waving Israeli and Shiloh flags, while the Arabs and security forces watched in disbelief. Such a display of Jewish pride has been, unfortunately, rare in recent years. Then we continued singing all the way through the Arab market to the Kotel.

This year the plan is to begin from the exit of Shiloh and walk first to our cemetery, to Avihu’s grave. We will end the march at Har Hazaytim, the Mount of Olives Cemetery, where most of the disinterred from Gush Katif are now buried.

Since we failed in canceling Disengagement, now, we too are in danger of losing our homes. This is one of the points that wasn’t stressed enough during our protests. I tried to tell people that it wasn’t just a matter of a few thousand good Jews in Gush Katif and Northern Shomron, it was a, G-d forbid, dangerous precedent for all Jewish communities in Eretz Yisrael, the Land of Israel. If we don’t have the right to live in Sanur or Elei Sinai, then we don’t have the right to live in Rishon Letzion and Tel Aviv.

Even before the innocent Jews were thrown out of their homes and the bodies dug out of their graves, the government was already leaking their plans to destroy more communities, like ours in Shiloh, G-d forbid. You just have to look at the route of the so-called security fence strangling Jewish towns and cutting off tens of thousands of loyal patriotic Israelis, deserting us to the dubious “protection” of terrorists. Caroline Glick in The Jerusalem Post explains how the fence endangers Jews and protects Arabs, hauntingly like Moshe Keinan describes our mistaken and dangerous military strategy.

The mutilated country within those “borders” will be impossible to defend. Just because we lost the battle for Gush Katif and Northern Samaria, we must not give up. We lost that battle, but the war isn’t over yet.

The first Jew buried in modern Shiloh was Rachella Druk, HaYa”D, who was murdered in a terror attack almost fourteen years ago. Today there are a few dozen bodies in the Shiloh Cemetery. At least one was reburied after being disinterred from his Soviet grave, and others only came to Shiloh after their deaths, and that includes my husband’s parents. Others buried in our cemetery were residents of Shiloh who died from various “natural causes.” And unfortunately, Rachella was joined by a number of others, all young, who were also murdered by Arab terrorists. None of them lived long enough to marry and have children of their own. They are all “resting” together in what, G-d willing, will be their “final resting place.”

We can no longer take anything for granted, and we must be strong, like Avihu was strong. “Od Avihu Chai,” is what the march is called not to commemorate his physical strength, which was legendary, but to remember his strong charismatic morale. His soldiers tell of how he successfully motivated them to attempt the most difficult and dangerous tasks. That strength still lives.

Join us in our march to preserve the State of Israel.

For more information call 02-940-1111. I will also post the scheduled time we should be arriving in Jerusalem for those who want to join us there. Check my blogs for that information.

Your March from Shiloh is truly inspirational.

Neighbors on my block (Brooklyn) have started learning Sefer Yehoshua. Learning Sefer Yehoshua has really been wonderful. We've been getting material from Meam Loez and Torah.org. Torah.org has wonderful material on Sefer Yehoshua, pasuk by pasuk. Each week the group meets at a different house on my block (we are around 9 participating women and kids play nearby). The hostess prepares a Perek in Yehoshua (as well as nosh of course). I prepared Perek Vav this week. This week was about the conquering of Yericho. There were 7 Shofars with 7 Kohanim in front of the Aron and for 7 days each day the warriors of the 12 tribes surrounded Yericho. Then they circled it 1 time each day. On the 7th day however, they circled Yericho 7 times. The Seventh day was Shabbat. There's something special about the number 7 and Eretz Yisroel. (There are parallels of encircling Yericho to the Hakofot on Sukkot in the time of the Beis Hamikdash. Please enlighten me about the Minhag in Yerushalyim nowadays. In shuls on Sukkot, we circle around the Bima each day and on Hoshana Rabba 7 times. I understand there are very significant kabbalistic meanings of this practice that complement the significance of Am Yisroel encircling Yericho)

In the procession of Yehoshua, the Shofars proclaimed Hashem King. The Shofar proclaims Hashem as King on Rosh Hashana as well. The conquest of Yericho was primarily to demonstrate the Kingship of Hashem. The city was conquered via a blatent miracle from Hashem. When the Tekia sounded and the people shouted, the walls sunk. As Yericho was the first conquest in Eretz Canaan, it was especially important that there be a proclamation that G-d is King and He created the world and decides who to give the Land of Israel. He showed via miracles that He is giving it to Am Yisroel. The entire city was cherem LaHashem. (Appropriate that on Shabbos one should not enjoy any benefit from Chillul Shabbat, even though Shabbat was precisely when Hashem wanted Yehoshua to conquer Yericho) The metals, gold, silver, copper brass were cherem for the treasurehouse of the Mishkan and the rest of the city was totally destroyed. Men, women, children, young, old were slain by the sword except for Rahav and her house. The idolatry was so terrible that what was done to them compares to what is to be done with Amalek so that the evil ways of the people would not adversely affect Am Yisroel. Rahav's possessions were saved with her even though the rest of the items in the city destroyed completely, so that she shouldn't be left homeless. She and members of her family turned over a new leaf and accepted to be part of Am Yisroel and married the elite of Am Yisroel The city was burnt and Yehoshua swore that it should never to be rebuilt so that the world is witness to the power of Hashem and His decision to give the Land to Am Yisroel. Yehoshua wrote Aleinu, proclaiming G-d as King and recited it backwards and frontwards during the conquest. This was then put into the Rosh Hashana davening.

At the group meeting, I noted the email from Rachel Saperstein (Operation Bandaid) and the email from Dr. Temkin about the airlift. I also brought up the teenager still in prison.

Lester and Jeannette Goldsmith from my shul (in laws of Chaim Richman) came back from Israel this week. He was at the funerals of the disenterred from Gush Katif at Har Hazeitim. He said that 12 of the bodies did not decompose. A sign that these were truly tzadikim.

He described a scene where he was on the bus in Bet El and one of the people on the bus was a refugee of Gush Katif a former farmer of 30 years and he was crying that he had a house, a farm and now he didn't even know where to get off...

There are those that believe, myself included that the time has come to be like the warriors in the time of Yehoshua who were willing to defend the right of the Land of Israel. We are Bnei Brisecho, the Children of the Covenant. The State of Israel may not see the need to defend our claim to the Land. Let those warriors (age 20 and up) that wish to defend our claim to the Land come forth and unite and may Hashem be with us.

As I was performing Kaporot Erev Yom Kippur designating the money for Operation Bandaid, I received a phone call telling me about a young women age 42 who passed away suddenly a week ago Friday night I thought to myself, now I know why I'm doing Kapparot. On Yom Kippur when we were all walking to shul in our rubber sandels and slippers in the drenching rain, my thoughts were on the people of Gush Katif and their open sandels...