Just a few years ago, the powers that be in our Binyamin region thought they were improving our lives by building a sort of bus stop/hitchhiking post on Highway 60 going north at the Shiloh Junction. It has a bench, top and backing. For safety there are even a few poles that in theory would stop a terrorist vehicle from ramming into waiting Jews seated there.

Yes, in theory, sitting at some desk, designed and planned by "experts" who own cars and get cars from their employers, that bus stop/hitchhiking post is a gem.

But for us, those who get dropped off there, or those who have to that bus stop/hitchhiking post, it's terrifying.

A couple of months ago, there was an announcement that due to the heavy traffic by the Shiloh Junction, we're being upgraded to a traffic light.

Thank Gd, more than just a traffic light will be gracing our junction. The entire Shiloh Junction is being upgraded. There will be designated lanes for right turns. The construction of this new Shiloh Junction has been causing traffic delays most nights. It's far from finished, but the terrifying walk along the road is now a thing of the past. Last night I happily hopped, skipped and jumped while making my way through the dirt and rocks until I could cross the road and catch a ride going into Shiloh. The icing on the cake was when someone offered me a ride before I even reached the sidewalk. 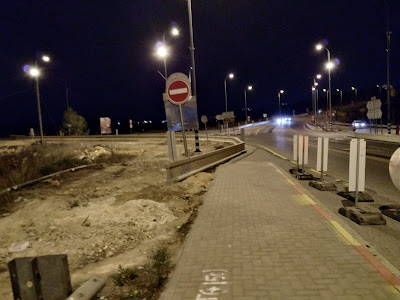 Next big request is that they make that  bus stop/hitchhiking post into an official bus stop, so we'll have more transportation northwards to Eli, Ariel and Tapuach. Gd willing....
Posted by Batya at November 12, 2019