Quiet on The Coalition Building Front, Good or Bad?

Israel has been in the Election and Government coalition building mode for close to a year already. We've had two national Knesset Elections, and still Bibi's steering a "temporary," lame duck government.

After the first 2019 Elections, Binyamin Bibi Netanyahu, the sitting prime minister and #1 in Likud, was entrusted with forming a ruling coalition, because he appeared to be the only party leader with a chance. He failed. And Benny Gantz, head of the Blue & White Party didn't do what the wily and experienced Bibi would have tried. Gantz didn't work behind the scenes to craft a coalition and surprise the country with it at the Knesset vote to disband and call a second 2019 Knesset Elections.

2019 Knesset Elections Redo also ended with a tie. There are basically four blocs of Knesset Members:
Likud leads the Right, though it prefers calling itself Center, and Blue & White leads the Left, though it prefers calling itself Center. Please don't get too confused, because they define Center differently. "Center" is one of those code words that politicians think make them popular with citizens of all stripes, like parve food in a kosher kitchen which can be served with both meat or dairy.

Center doesn't work with me. I don't vote for anyone whose ideology is "get me elected." I must know what the person plans to do for the country, their vision, red lines etc.

Simply put, the Likud can work with the Hareidi, while Blue & White campaigned to delegitimize chareidim from Israeli society and government. Blue & White promised a chareidi-free government. Their stated reason is the lack of patriotism of the chareidi public and their relatively low IDF army service. They'd like the support of the Arabs instead, but truth be told, Arabs are even less patriotic and less apt to serve in the army. Hmmm... does that make sense?

The best way for one of the big parties to make a coalition is to get deserters from the other side. Or are we going to have elections yet again? 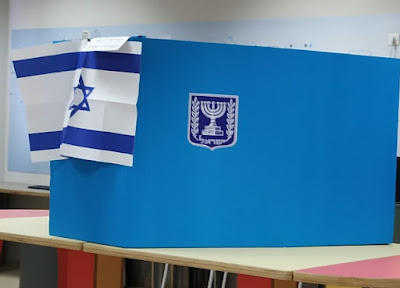