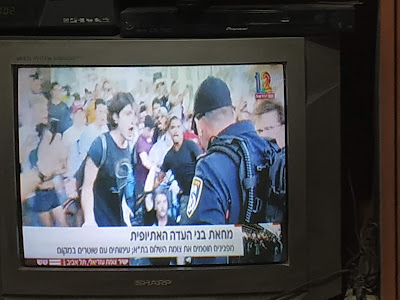 If you watch Israeli television news, you'd think that Israel was the worst country in the world. There seems to be street protests and riots all over all the time.

According to the news: 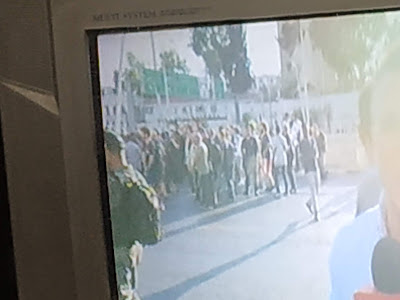 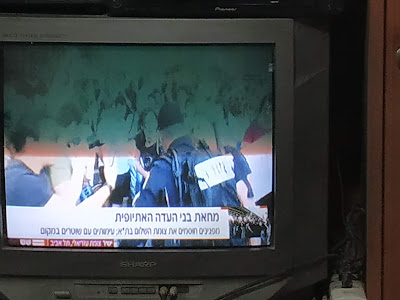 I am using pictures of the so-called anti-racist protests to illustrate this post, because it's very clear that white agent provocateurs have been leading the movement/riots. They began with the death of an Israeli of the Jewish Ethiopian community by an off-duty policeman. The media has been ignoring the fact that all the evidence shows is that the policeman and his family had been in danger, and the death was totally accidental. The orchestrated violence, anti-police and anti-government acts did not come initially from the community. They are being led by white Leftists. Follow the money.

Although early childhood care, daycare centers have their problems, the solution is far from simple. Who's going to enforce better workers? Those loud, nasty-mouthed demonstrators? Around the country there's a terrible shortage of people willing to work as caregivers. It's hard work, and the pay is low. Even if there are cameras all over, how could that help? Who's going to look at the films? Men hoping to see breastfeeding mothers? And no matter how carefully the "authorities" are in supervising official daycare centers, there will still be people who prefer sending to the unofficial ones.

And lastly, for now, about the high price in housing. The principle is Supply and Demand, which exists all over the world. Some of the repeated news items I caught on television told of hard to believe housing rip-offs in Tel Aviv. In one case, what must be a humongous apartment was divided into fifteen 15 rooms, which people rented individually for an outrageous sum. To make it even less believable, they share the one kitchen. I can't really imagine anyone living like that; maybe this is office space. Besides that, nobody forces anyone to shell out large sums for small spaces, unless the people have the money and don't care about the space. That's what Supply and Demand is all about.

Every day and night, newscasts concentrate on how terrible it is to live here in Israel. Considering that we're having elections again in a few weeks, and it's no secret that the media hates Bibi, I'm convinced that they're working hard to galvanize the votes for anyone but Bibi.
Posted by Batya at 11:08:00 AM

“The mainstream media has abandoned
all pretense of objectivity.

Whereas in the past journalists viewed
themselves as unbiased chroniclers of
the news, their focus today is on
manufacturing it and dominating
the ensuing conversations.

A journalist’s influence today isn’t
determined by the quality or accuracy
of their reporting, but rather the size
of their Twitter following and the
frequency of their television appearances.”

[1] article about Muslims
raping Jews and other non-Muslims:

[2] Testimonies of Palestinians tortured by the
Palestinian Authority to be shown at The Hague:

Mark R. Levin (a lawyer and
author of the best-selling book
Unfreedom of the Press) said:

“The press is eroding from within, not from
government oppression or suppression…

not by President Trump’s hand, but by their own
self-censorship, group-think, bias by omission,
and passing off opinion, propaganda, pseudo-events
and outright lies as news.

… A self-perpetuating and reinforcing mindset
has replaced independent and impartial thinking.”

Mark R. Levin (a lawyer and
author of the best-selling book
Unfreedom of the Press) said:

“[Journalists and news outlets] serve as filters
attempting to enforce uniformity of thought …
centered on the Progressive ideology and agenda.

Issues, events, groups and individuals that do not
fit the narrative are dismissed or diminished.”

Mark R. Levin (a lawyer and
author of the best-selling book

Unfreedom of the Press) said:

PS: You have little chance of getting
unbiased news from the mainstream news media!

“The next day [after the move of the USA embassy
to Jerusalem] the Liberal media vilified everyone
associated with the embassy move and glorified
the poor Hamas terrorists.”

PS: You can forget about getting unbiased
information from the mainstream news media!

Wish everyone would get on board and start smelling the coffee. The world press has gone completely rogue to radical leftism (globalism). It's the same exact thing happening in the States and Israel is like a mini U.S., r'l. The press is trying to destroy Trump and the same with Bibi. The left are promoting all kinds of protests. This can all lead to anarchy. These are socialists who are G-Dless and are power hungry and full of greed, promising everyone everything while they themselves gain control over everyone. Guess this really is what 'chevlei' Moshiach is about.
Also, we see the insanity of Barak (who grew a beard) and is telling Bibi that he is going against the 3 Oaths and is trying to all of a sudden act semi-religious but remaining a complete leftist (oxymoronic). The world has truly gone bizzaro!

Mr. Cohen, thanks for the info.
a, so terribly true and dangerous for the world.

You are very welcome, Batya.

Your thanks means a lot to me.