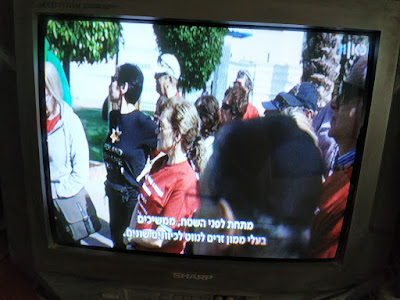 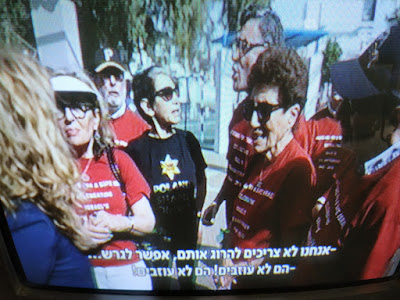 I was happy and excited to see Helen Freedman and other AFSI members on Israeli television, but then I realized that the program wasn't exactly pro-AFSI.  I only caught a few minutes of it. Apparently, it was about foreign influence here in Israel, and they lumped all sorts of things into an inaccurate misleading mess.

Did anyone catch the entire show and know more? Is it on youtube?
Posted by Batya at 7:02:00 AM

"What is the Israeli-Arab conflict about?"

“[IUMS Trustee Sheikh Hassan Ould] Aldo
and the [Muslim] Brotherhood use language
similar to what Hamas used in its original
charter, which rejected any peaceful coexistence.

To them, Palestine is part of
a waqf, a holy Islamic trust,
that no person can negotiate away.”

The Koran teaches that Jews are
the worst enemies of Muslims.

“You will find that the people most
hostile towards the believers [Muslims]
are the Jews and the polytheists...”

At a [year] 1937 [CE] lecture to the British
Foreign Ministry, the King of Saudi Arabia said:

“Verily, the word of Allah teaches us,
and we implicitly believe this...
for a Muslim to kill a Jew...
ensures him immediate entry into Heaven...”

“For Hamas, the Israeli enemy is more
than just a geo-strategic opponent.

It is, rather, a delegated religious target
slated for annihilation, one whose obligatory
and violent elimination will confer blessedly
eternal life upon the Islamic sacrificer”.

The Koran requires the "abasement and poverty" of Jews: