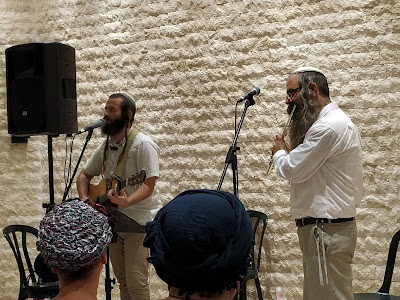 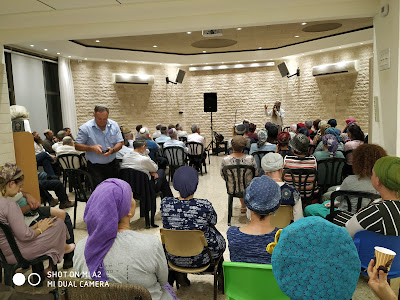 Last night, after breaking the Tzom Gedalia fast, there was an evening of inspiring song and stories by the father-son duo Binyamin and Avraham Yitzchak Rosensweig, l'ilui nishmato shel Avihu Keinan, HaY"D, who grew up in Shiloh.

Avihu was killed in a badly planned army action against Arab terrorists. Immediately after Avihu's death, his father Moshe, announced that in protest, he'd be marching on Jerusalem to the President's Residence, and that's what we did. Later on until Avihu's tenth yartzeit, his father led hikes in the area.

I must admit that except for the prayers in their repertoire, none of the songs were familiar. My genre of inspiring Jewish Music is from a previous generation or two, such as The Rabbis' Sons, Rabbi Shlomo Carlebach and Diaspora Yeshiva Band. The most up-to-date are the songs sung by Yehuda Glanz.

It was a meaningful evening, just perfect, and wonderful to be with my Shiloh neighbors.
Posted by Batya at September 13, 2018