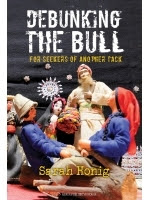 The good news is that you can now buy an entire book of Sarah Honig's articles.

Sarah Honig is a veteran columnist and senior editorial writer who joined The Jerusalem Post while still in her teens. She served for many years as The Post's political correspondent (a position she also held on the now-defunct but once-influential Davar), headed the Tel Aviv bureau at the Post and wrote daily analyses of the political scene, along with in-depth features...


Honig's book "Debunking The Bull," Gefen Publishing House, is attractive with very legible font.  Honig writes  Another Tack, whick is one of my favorite column's in the Jerusalem Post. I'm glad that her articles have now been collected into a book.


This is an anthology of Another Tack columns which originally saw light in recent years on the weekend pages of the Jerusalem Post, where they have been a regular weekly feature since 1999.

The bad news is that for whatever reason this wonderful selection of Honig's Jerusalem Post articles is lacking the dates these articles appeared.  In some cases, you can easily guess the date and/or do an internet search.  But if you're already doing an internet search to discover when the article was published, then why buy the book, especially if you go around with one of those new electrical gadgets like smartphones, ipads etc which give you the possibility to read anything online?

One reason is that, at least for many of us, we like the feel of a book and don't own one of those gadgets.  Or you may be in places and situations where you can't use the electrical equipment, especially internet searches to find all of Honig's articles.  And for those who are Shomrei Shabbat, Sabbath observers, the modern electric machinery is forbidden on Shabbat.

Of course, as long as you have a computer, or some other way of doing internet searches, you can discover aka search for Honig's articles and their dates.  I decided to try a search for one that caught my fancy, "Drenching Little Srulik," which Honig illustrated with a classic Dosh cartoon.  Of course I found it, though sans the cartoon.  You can read that article on Honig's site/blog, in the Jerusalem Post or on a number of other internet sites.  By searching further I even found the missing illustration. 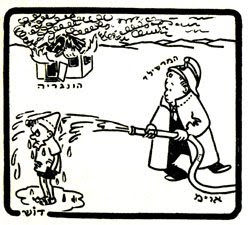 Now I'll  use that article to illustrate the brilliance of Honig's writing.  She took this cartoon, drawn and conceived in 1956 by the amazing Dosh, Israel's greatest political cartoonist and showed its modern relevance in her article written in 2009.


When I grew up, got to meet and even strike up a friendship with my childhood idol Dosh (the late Kariel Gardosh), I asked him which, to his mind, was his most enduring political caricature. For that, he replied, we need to return to December 1956, approximately a month after the Sinai Campaign and the Soviet invasion of Hungary. Dosh noticed that while the international community was seething about Israel’s feisty self-defense, it wasn’t overly perturbed about the human rights and self-determination brazenly crushed beneath heavy military armor right in Central Europe.
The hypocrisy, Dosh recalled, was hardly surprising but nevertheless galling, particularly the shamelessness of it. So he compressed it all into one frame. In the background a house labeled Hungary is going up in flames. In the foreground UN secretary-general Dag Hammarskjold, in firefighter gear, wields a hose labeled UN. But he’s not dousing the blaze. He’s drenching little Israel – Dosh’s iconic sandal-clad Srulik – who stands soaked, angry and perplexed as he’s subjected to more wet punishment.

And how does this relate to 2009 when Honig wrote the article?


IF DOSH only knew how right he was. Today he’d probably have produced a very similar pen-and-ink commentary, but with Iran burning and Barack Obama extinguishing – Israel. The more things change, the more they stay the same.


Not only isn’t Israel scary like Iran, it’ll broadmindedly collaborate in an effort to appease its detractors. How facile it therefore is to claim that peace and bliss on earth hinge on tearing down a few Jewish tents, rickety lean-tos, ramshackle sheds and decrepit trailers. It’s true heroism to take them on in the guise of securing global propriety. It’s plain to see that no greater peril plagues humanity – if we only avert our gaze from Iran, that is.
Accordingly, to stress the need to downplay the Iranian fuss, Obama gave his people a lesson in moral relativism: “It’s important to understand that, although there is amazing ferment taking place in Iran, the difference between Ahmadinejad and Mousavi in terms of their actual policies may not be as great as has been advertised.” Not unexpectedly, Obama informed the unenlightened masses that he won’t take sides:” I take a wait-and-see approach… It is not productive, given the history of US-Iranian relations, to be seen as meddling in Iranian elections.”


IN HIS MEMOIRS, Ayatollah Khomeini’s first foreign minister Ebrahim Yazdi writes that “the shah was doomed the minute Carter entered the White House.” The novice president indiscreetly sent all the wrong signals, beginning with an exceedingly public cold-shoulder to the shah. The mullahs were heartened and exuded confidence. Increasingly shaken, Muhammad Reza Pahlavi sought to ingratiate himself to Carter by relaxing restrictions on opposition agitators. That further emboldened the religious fanatics and spawned unrest. Carter admonished the shah against quelling the disturbances by force.
Willy-nilly, Carter’s bungling was instrumental in installing a reactionary, repressive theocracy in Teheran. Under the banner of freedom, Carter helped the forces of medieval darkness. The shah was a goner and the ayatollahs repaid Carter by holding 52 American embassy staffers hostage for 444 days until he was replaced by Ronald Reagan.
Carter’s indisputable legacy was the bloodshed of the Iran-Iraq War, the carnage at the Buenos Aires Jewish Community Center and Israeli Embassy, the burgeoning of Hizbullah and Hamas, the co-option of Syria/Lebanon and Gaza into Iran’s evil sphere, massive worldwide terror-mongering and lately nuclear ambitions and rhetoric about wiping Israel off the map.
During the entire embassy standoff fiasco, strikingly ineffectual Carter dithered piteously. Yet he compensated for inaction on one front by hyperactivity on another. As per the Dosh depiction, he turned the water-jets on Israel.
CARTER’S ENTIRE diplomatic energy reserves were misspent on pressuring Menachem Begin at Camp David, and quite ruthlessly. His latent anti-Semitism would finally manifest itself with the publication of his Palestine: Peace not Apartheid. His misguided liberalism in international affairs led Carter to bolster the worst despots in our time while lashing out at one of the most intrinsically democratic of societies anywhere – Israel.

If you think that only Israel is endangered by the growing Moslem threat, I'll also bring you an excerpt from a different article, A Masjid Grows in Brooklyn, which also appears in Honig's book.


I was Brooklyn bound - or so I thought...
I hadn't been in NYC for ages, and catching up with an old classmate seemed an indispensable component of walking down memory lane. What's more, Kathy still lives at the same address in the cozy middle-class neighborhood where I sometimes visited her way back then. It was common for the house-proud Irish to keep property in the family, and hence I'd soon reenter the two-story red-brick home in whose wood-paneled rec-room we occasionally whiled away hours. But when I climbed up the grimy station stairs and surveyed the street, I suspected that some supernatural time-and-space warp had transported me to Islamabad. This couldn't be Brooklyn. Women strode attired in hijabs and male passersby sported all manner of Muslim headgear and long flowing tunics...
She's now a member of a fast-dwindling minority because "people are running away. We're among the last holdouts of our generation. My kids have fled." Pakistani and Bangladeshi groceries lined the main shopping drag, and everywhere stickers boldly beckoned: "Discover Jesus in the Koran." An unremarkable low-slung building on the corner of Kathy's block was now dominated by an oversized green sign identifying it as Masjid Nur al-Islam (the Light of Islam Mosque) and announcing that "only Allah is worthy of worship and Muhammad is his LAST prophet." Here too Christians were urged to "turn to the Koran" if they were "genuinely faithful to Jesus." It wasn't hard to identify the remaining non-Muslim residences. Kathy's was typical. A huge American flag fluttered demonstratively in the manicured front yard, accompanied by a large cross on the door and an assortment of patriotic/jingoistic banners. "We're besieged," she explained. "Making a statement is about all we can do. They aren't delighted to see our flag wave. This is enemy territory."

I suggest you read the entire article.  As you can see in these excerpts from the book, Sarah Honig is an excellent and compelling writer.
Sarah Honig also has a blog-site. Check it out.
Posted by Batya at February 21, 2013