Purim Joke or What? I'm Beginning to Feel Sorry for Bibi

One thing I have no doubt about. These recent Knesset Elections here in Israel have been the elections from Hell for Prime Minister Binyamin Netanyahu. Nothing has gone as planned. His pact with Avigdor Lieberman-Yisrael Beiteinu ended up costing him a comfy plurality. And instead of the usual one surprise strong showing of newcomers, there were two, Yair Lapid-Yesh Atid and Naftali Bennett-NRP aka Bayit Yehudi, who have a combined MK total which matches his Likud-Beitenu one. And even worse, those two newbie party leaders have joined forces against him making outrageous demands. They're making the normally wily Bibi look a stodgy political klutz.
While his two hurry up clocks, the legal time limit he has to form a government and United States Presidents Obama's badly timed visit, have been ticking coalition negotiations have been unprecedentedly difficult. Bibi pulled one surprise by getting Tsippi Livni to join him, even though her entire campaign was based on saying she preferred the opposition because Bibi shouldn't be Prime Minister. She had claimed that she would be best, although the public didn't buy her spiel.
And now, to make matters worse, there are rumours that super-loser, with a bare minimum vote to get into Knesset, Kadima's Shaul Mofaz may be joining with Lapid and Bennett to make coalition demands. Could that just be a Purim joke? Here in Israel, it's Purim and depending on where, there can be two days of it. Purim jokes are like "April Fool's Day." 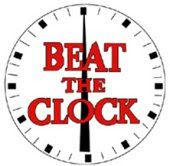 In the meantime, Bibi's staff is playing Beat the Clock and trying to make deals. If we can believe the headlines, they've decided rather wisely IMHO to speak simultaneously with both Yesh Atid and NRP.
Whatever, I just hope it's going to be good for the Jewish People and the State of Israel.
Posted by Batya at February 24, 2013

G-d bless israel and happy purim, batya and to all . living outside the Land, and being a noahide, i really cant think why everything is so complicated. Purim is a miracle for you all. Hashem saved you all from what seemed a definite wipe out. yet in a split second all was well. at that time the enemy was an outsider. amalek. this time, its not the enemy you all are dealing with, your own. i just pray Hashem will turn all hearts to be as one, as in mount sinai. i am also wondering whether Moses faced a more difficult time, then, or is it more difficult now. the answer to the rest of the world too is meant to come from isr. last week i read an article from the koshertorah.com by rabbi ariel bar tzadok. he wrote: Close? Drawing close to G-d is never about a journey towards G-d. Drawing close to G-d is actually a journey away from everything that blocks our vision from seeing that G-d is already here. blessings.

thanks, 10, I appreciate your thoughts and comments. It's very complicated. All we know for sure is that Redemption is close, but we won't know just how close until it happens.

Is there anyone among those who voted for Habayit Hayehudi who is pleased that Bennett has hooked up to Lapid? Then why don't they replace Bennett with a real leader? Bennett failed when he worked for Bibi and then failed again as head of Moetzet Yesha. But his present failure is more serious for the nation.

No, no one voted for this pact from Bizarreworld between Bennett and Lapid. The two men have fallen in love with each other. It gives the unification between the stick of Bayt Yehudah and the stick of Bayt Ephraim an entirely different meaning. And before election day, there was no talk of this Anschluss ever taking place. It was the furthest thing from anyone's mind. But I am withholding judgement on whether this is a brilliant move to force new elections where both parties will clean everyone else's clock or whether this is the Compact from Hell. Yet, Otzmah was short by about 9000 votes. So our vote for Otzmah would have gone down the tubes with the other 66,000 voters who wasted their vote. Hey, that is about 15,000 more that wasted their vote on Baruch Marzel in 2006...and I was one of those. But in the end, it is G-d who decided that Naftali Bennett would fall in love with Ya'ir Lapid...after the elections.

Dov, I can't imagine the strong Right from NRP being happy. If only they had run with Otzma... then there would have had been different results...
That crazy "if..."

Laser, Bennet was voted in because NRP needed a good pr man. And that's what they got, pr, not ideology, but they wanted him to make a deal, with Bibi not Lapid...

thanks batya. the sages say its always darkest before the dawn, or most difficult just before the mosiach comes. non jewish nations are now at its strongest in trying to mess up isr. in return we are all messed up with the eonomy rollercoasting down the drain or sea. the fact that inspite of all isr 's economy is holding strong, more oil and natural reserves are being found gives me the understanding (at my humble level) that Hashem is busy preparing for the return of the jews, fully. so i pray mosiach is truly round the corner.yesterday i was reading about purim and some midrash in the orth sites. it gave me much spiritual strength that Hashem can never forget isr. its when king ahaverosh could not sleep and he went thro the chronicles and found out how mordechai had saved his life. one reading told, that this more than anything else tells how Hashem created the "cure" before the "illness".Hashem prepared for isr's salvation before the wrong was committed, eating at the feast. then megillah 16a....if something written in the world below for the merit of the jews was not erased, how much more can that which is written above. [G-d's promises in the torah never to be erased]. maybe a concealed purim miracle has occured and will be made open within the next few days. who knows, pharo's trip ma y be postponed.

Remember, 10, our day starts when the sun has set. First it's dark and then we see the rays of the sun.

Isn't there any activity to remove Bennett from his post?

Laser,
the agreement with Lapid is about social change and economic revolution, and most of all against old politic. And those were his main topic during the elections...
Bennett isn't going against the religious, quite the opposite, the change he made to Lapid's proposal are really good and can bring a true change which won't harm anyone.

As it was, without this, it would have been either a anti-religious leftist coalition, either one like the last one, going on without any true change.

And remember, the one doing the negociations with the Likud is Uri Ariel, not some young politician without ideology or experience !