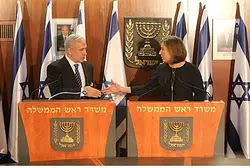 Bad news for the State of Israel and its citizens.

We've got Tsippi riding shotgun with Bibi at the wheel.

Tsippi's special job will be to make peace sic with the Arabs. I kid you not.


Israel is extending its hand once more for peace with the Palestinians, Prime Minister Binyamin Netanyahu said Tuesday at a press conference while announcing that former foreign minister Tzipi Livni had joined his coalition and will lead the Israeli peace negotiating team.
"I am hoping for a peace deal based on two states for two people, as per the parameters I outlined during my speech at Bar Ilan University," Netanyahu said at the conference. "Today Israel extends its hand once more for peace. We want a peace process, and we hope that it will yield results."

Since Naftali Bennett, who aligned himself with Yair Lapid, after campaigning that he will be a valuable member of Netanyhu's coalition/cabinet only succeeded in alienating himself further.  He thought that Bibi would be so desperate for his MK's to add to the coalition that the PM would come begging, but no surprise the political newbie miscalculated.


And no doubt that Yair Lapid sees his future with Netanyahu in the cabinet!  He's not going to stick with Bennett.

It really doesn't matter that this Netanyahu-Livni coalition agreement goes 100% against both their campaign promises, statements etc. This is politics, and politics is a search, striving for power and politicians will do and say anything to get it.


During the election campaign, Netanyahu had reportedly made clear to several of his senior staff that no talks were taking place with Livni or other members of her party, and that the chances of her joining the next government with him as Prime Minister were nil.
“Livni managed the negotiations with the Palestinians poorly,” Netanyahu was quoted in December as having told ministers. “Her entire stance is wrong and unacceptable to me.”

So, it's time to get comfortable and watch Bibi's show.

Wait a second - in the run up to elections, you were castigating Bennet because he was going to fold to get his Volvo. Now that he sticks to his guns over ideology, this is no good either? You can't have it both ways!

Bennett says let's talk ideology and then cabinet posts. That's bad? Bibi is willing to do anything to put together a coalition--you can forget about sticking to any "beliefs" if he has any. Shelly to the finance ministry--no problem. Tzippi in charge of "peace" talks--no problem.

Yonatan, a, Bennett isn't doing an ideology. He really does not know how to negotiate.

Agree that Bennett is green and bit off more than he can chew. Very concerning.

Ellen, he's an awful Poker player and no head for psychology either, besides not understanding coalition politics.

Boy--even you can't see that he's just honest? True--he's not into "coalition politics" because it's a game of lying and posturing.

How much longer before we finally nix that evil word peace from our political lexicon. It's a euphemism for surrender. It's like believing in a virgin birth.

I don't know Batya, it seems to me like he is holding out for the principles that he ran on, not hoisting a white flag to get ministerial positions. I appreciate that and expect him to bring down the coalition (if he gets in) if he can when/if Bibi tries to give away the keys to the kingdom.

Yonatan, unfortunately this morning's news is about forming a left+Haredi coalition, leaving Bayit Yehudi and most likely Lapid, too, out in the cold.

Shy, Bennett's sales pitch to Bibi is infantile and pathetic. He blew it. It may be the right one for selling a business, but it's not the way to make a deal with Bibi.

Yonatan, Bennett had two main parts to his campaign.
1- that he'd be in the cabinet
2- the "platform principles"

If he and his voters think that his "platform principles" are so important and to pass them he needs to be in the cabinet, then he's supposed to first sell himself to Bibi and then while in the cabinet promote his principles. He got it backwards.

Batya, I don't know what you are complaining about, and I say this as someone who did not vote for Bayit Yehudi and who does not view Bennet as being someone with great political potential.

Fact of the matter is he is being honest. I credit the man. He's not infantile. He's straight talking. Where I come from, this is supposed to be a positive trait, according to my Jewish hashkafic sources.

To hell with Netanyahu, who represents everything diametrically the opposite of Bennet's behavior.

I really do not understand why you are essentially asking Bennet to sign on the dotted line with his blood.

Shy, Bennett campaigned that he would be in the cabinet. Now he has changed his tune, but he hasn't shut up.

Batya, Bennet campaign that he would be in the cabinet no less than he campaigned that Bayit Yehudi has a platform which they will not veer from.

Seriously, ask yourself why you are venting away and not dealing with simple facts.

The fact is that I don't really mind if NRP goes with coalition. I think it's important for there to be a Right opposition, which is why I voted Otzma. And if Bennett really wants to be in the coalition, he's going about it badly.