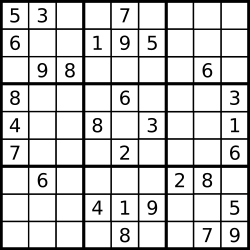 Israeli Prime Minister Binyamin Netanyahu is a very intelligent well-educated man.  I wonder if he exercises his mind with Sudoku.

Considering the leaks and guess-work in the media, he's finding it difficult and slow-going to form a new coalition.  His old cabinet is "lame duck."

There really isn't all that much flexibility considering, the Arab parties, how unreliable Tsipi Livni is etc.  Netanyahu most probably needs Naftali Bennett's NRP-Bayit Yehudi party which has a lot of inexperienced parliamentarians.  Another problem is that they haven't been on good terms for a number of years.  IMHO, they are both pragmatic and ambitious enough to find a way to work together.

The present political situation, post-elections, here is great material for satirists.  Take a look at Latma's A Hebrew's Word with Avishai Ivri 31/01/13, English subtitles if you need them.

If you remember, not that long ago, Bibi surprised most everyone by making a deal with Mofaz, which quickly fell apart.  So, I wouldn't be all that surprised if something secret isn't cooking between Netanyahu and Bennett.


The precise circumstances of Bennett’s abrupt departure from Netanyahu’s employ five years ago have never been fully revealed, but the abidingly chilly nature of the relationship between them was underlined by their perfunctory handshake after the Knesset swearing-in ceremony on Tuesday. Yesh Atid leader Yair Lapid, who has antagonized Netanyahu by openly declaring his prime ministerial ambitions, received a far warmer greeting that day, and on Thursday held the second of two lengthy meetings with Netanyahu about a coalition partnership, with an agreement to meet soon for a third.
Somewhat insultingly for Bennett, Netanyahu also met Thursday with left-wing Meretz leader Zahava Gal-on, and Tuesday met with Labor leader Shelly Yachimovich, neither of whom wish to join the coalition. (Times of Israel)

Bennett campaigned as if his participation in the coalition was a certainty.  Maybe that was a mistake as far as Netanyahu is concerned.  I kept telling people that brewing in the coalition does not give power.  It limits one's voting independence, something that Bennett's new MKs may be upset to discover.

And in the meantime, we pundits here at our keyboards will just have to wait, like the rest of you...
Posted by Batya at February 08, 2013