Many of you have been asking for more of my stories about our early days in Israel, fifty 50 years ago. So here goes...

If you've walked to the Kotel from Jaffa Gate, or reverse direction, by following the inside of the city walls, you'll recognize where I'm standing.

Living in the Old City of Jerusalem, which wasn't referred to as the Rova Yehudi, Jewish Quarter, in those days was thrilling. It was both a tourist site and building site.

Some days we'd open the door of  our home the Maon Betar, corner of Rechov Plugat Hakotel and Rechov Hayehudim and discover it blocked off by swarms of tourists. Once some tourists got all excited to see us, because they were friends of my parents and had promised to look for us.

Another day, when I was already close to my due date with our first child, I discovered that the pathway had been dug up, and it was a deep drop to the planks of wood that had replaced it. I closed the door and turned around. That was the end of my shopping, or I had thought. One of the guys living in Maon Betar insisted it was safe and helped me down. Later that day when he stepped down, the wooden plank broke. I'm so grateful I hadn't fallen; I would have needed the Emergency Room. 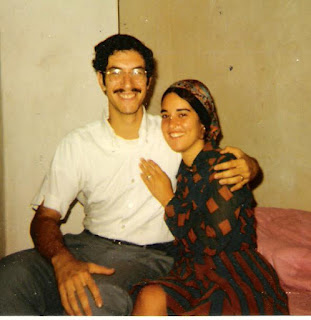 The photo on the left is from a few weeks after we had docked. If you look carefully you'll notice that my jaw is a bit swollen. No I wasn't hit.

About half way through our voyage to Israel, I began feeling what I suspected was an impacted wisdom tooth. I was in terrible pain. Our table mates in the dining area gave me a bottle of strong booze and instructed me in simple pain control. I'd dampen some cotton with the booze and keep it where the pain was. It got me through the rest of the boat ride.

Soon after we docked, we began inquiring about top notch dental care. While today's Israeli dentists are on a high level, fifty years ago, the situation wasn't as good, to put it mildly. A friend possibly Emanuel "Adam" Hanegbi, the father of Tzachi Hanegbi ,or David Federman, the father of Noam Federman, recommended that I go to Hadassa Hospital in Ein Kerem which had a dental clinic considered the most modern in the country.  They agreed with my guess; it was an impacted wisdom tooth. That's where I had it operated on. When the surgery was over, I was told to keep ice on my jaw. The only problem was that I didn't have any ice. So when we got off the bus we asked for some in a restaurant. And when we got back to the Old City, we got more from our neighbor Rabbi Moshe Tzvi Segal. 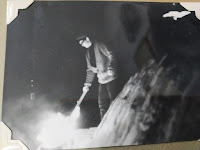 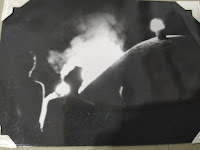 These two photos are from our first Chanuka. The guys in the Maon Betar took the mitzvah of pirsum haness, publicizing the miracle very seriously. With the help of cans and kerosene thy lit up an "impromptu" Chanukiya (menorah) using the rooftop domes of our building.

Further installments will get harder, because I don't have too many photographs.

I'd love to hear your reactions to these stories.
Posted by Batya at August 31, 2020

i just love this pic of you and winky. you both look so happy. and so young.
kol hakavod on sharing these early days in the old city.
and, the photograph of mishkan shilo is beautiful!