Parshat Shavua: Did Reuven Know What Happened to Yosef?

Last week after reading in Parshat Vayeshev I wondered if anyone ever told Reuven, Yaakov's first born son, what had happened to his young annoying brother Yosef.

Yaakov, their father, had sent Yosef to visit with his older brothers, which didn't make them very happy. In reaction, Reuven tried to get him out of the way, to safety in his mind, by putting him in a waterless pit. Soon after Reuven had to leave the group for a short time. While he was away, at the instigation of Yehuda, they sold Yosef to passing merchants. When Reuven returned he was horrified to discover Yosef's disappearance, and then the other brothers quickly covered his special coat with blood to make it appear that he had been taken by a violent animal. Nothing is said to Reuven about what had really been done to Yosef. I began asking Tanach teachers if I had missed something. The only response: 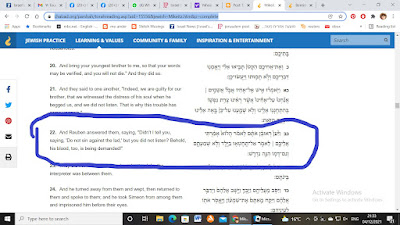 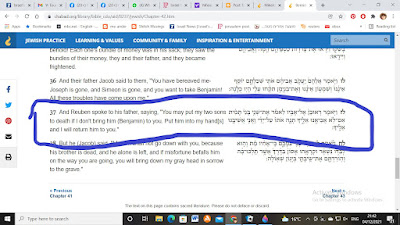 At this point, Yosef, disguised as an Egyptian, had insisted that if the brothers want to buy more necessary food in Egypt, they must return with their youngest brother, Binyamin. The brothers know that after the loss of Yosef, their father would never agree. In Bereishit 43:22 Reuven says that they're in this situation because of the blood of Yosef, whom he still thinks is dead:

Reuven's conviction that Yosef had been killed is most probably behind his incomprehensible "pledge" to his father when trying to get permission to bring Binyamin to Egypt:

Reuven's offer to lose two sons was to parallel his father's loss. Obviously, Yaakov didn't accept the offer. What father/grandfather would. Afterwards he did accept Yehuda's pledge, though neither he nor Reuven had a clue that it was Yehuda who was the cause of Yosef's disappearance.

Shalom Batya and Shavua Tov and,... Happy cChanukha..to you Batya and yours, and your readers,

Wow!!, to that thinking on Reuven and you taking time to search.

Your teachers should be very proud of you their student.