Last night I attended the Geula Cohen, ZaTza"L, event in the Beit ATza"G, Uri Tzvi Greenberg Center to commemorate her Shloshim, 30 days since she had passed away. For us, Geula was family. My husband had worked for her and with her for decades.

The hall was packed mostly with older people who had known Geula personally in her various roles, crusades and projects. There were very few politicians, but many activists and ordinary Israelis who had been inspired by Geula's history and contributions, yes, in the plural, to the establishment of the State of Israel, her unwavering support of Jewish Rights and Sovereignty in all of the Land of Israel and her promotion of the teaching of the poetry of Uri Tzvi Greenberg and the legendary fighters/member of Lechi and Etzel.

Tzachi Hanegbi, Geula's son, spoke beautifully and very suitably especially given the location of the event. I'll just repeat one very telling story, which he revealed to us last night. For a relatively short period of time they both served as Members of Knesset, Geula representing Techiya and Tzachi the Likud. Then there was the elections in which Techiya didn't get enough votes to be in the Knesset. Tzachi was nervous about how his mother would take it but forced himself to visit her soon after the results were out.

Instead of finding Geula depressed and/or angry, Tzachi was amazed to find his mother already galvanized, lobbying for her next project/cause. Geula's forced retirement from the Knesset was dedicated to the promotion of the teaching of  Uri Tzvi Greenberg, his contributions to Hebrew and Jewish Literature, poetry and more. If it wasn't for the vision of Geula Cohen, Uri Tzvi Greenberg would be forgotten. 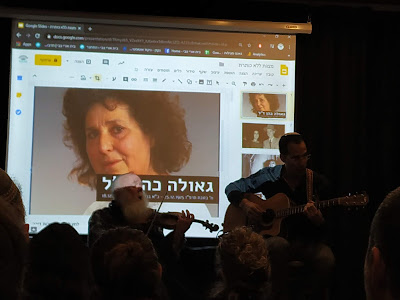 We must never forget Geula Cohen who was a great Jewish fighter for the Jewish Land, State, People, History and Literature.
Posted by Batya at 8:22:00 AM

It was very well done and suitable for the intimate nature of the event.
And hearing Ovadia Hamama singing "Ana BaKoach" was superb.

May Geula's spirit live on in all. Her parents named her correctly.