We Survived the Holocaust: The Bluma and Felix Goldberg Story, Book Review 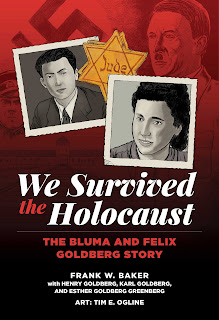 We Survived the Holocaust: The Bluma and Felix Goldberg Story is graphic memoir. Graphic here means cartoonish pictures. Bluma and Felix Goldberg's story is a true story. Things are obviously simplified, since it's short and written for children.
Times have certainly changed. Not long ago the Book Club I'm a member of chose Holocaust Literature as the genre for a meeting. Most members are of my generation, who grew up in the post World War Two 1950s. Besides The Diary of Anna Frank, there wasn't any Holocaust book for even an older child to read. Now libraries and book stores have shelves full of Holocaust Literature of all sorts for all ages, though it's hard to find books suitable for children.
We Survived the Holocaust is illustrated in black and white which suits to subject matter and is a reminder that the Holocaust was a dark and dangerous time.  Here are a series of pages to give you an idea. 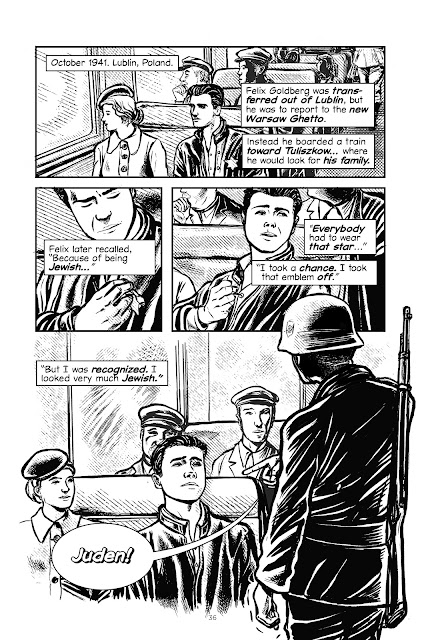 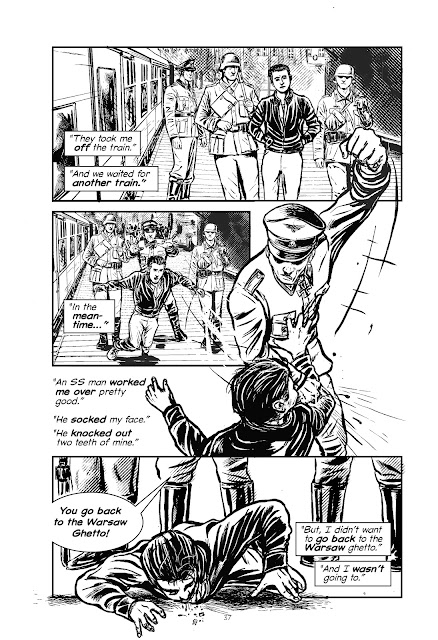 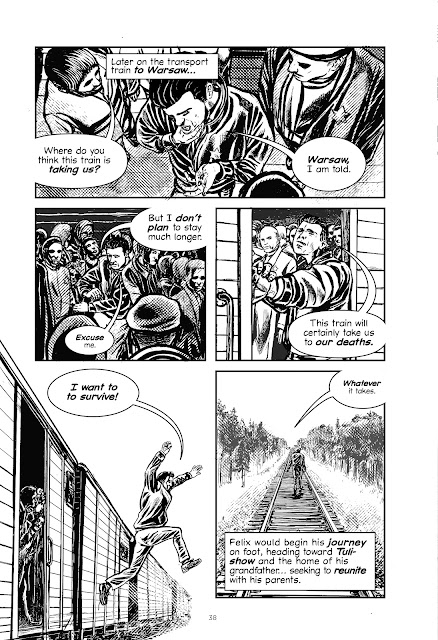 The general message is survival and heroism. Bluma and Felix Goldberg's story is totally amazing, and it's true, which makes it even better. It's almost incomprehensible to imagine ordinary people taking such risks and surviving such dangers. But we all know that somehow some people did survive and establish families and businesses after the war, after the Nazis had been defeated.
We Survived the Holocaust is an excellent tool for teaching children about Nazis and the Holocaust. As wonderful as the Goldbergs' story is, we mustn't forget that the majority of European Jewry was murdered during the Holocaust, whether gassed, gunned down or as the result of malnutrition/starvation or illness. The dead can't speak.
To help the reader, there are a timeline, a glossary, an index and recommended resources. We Survived the Holocaust: The Bluma and Felix Goldberg Story includes a postscript and information about the Goldberg children. I highly recommend it.

There were plenty books by the mid to late 1960s. Memoirs.

The Holocaust Kingdom: A Memoir by Alexander Donat originally published 1965,

Siimon Weisenthal's memor The Murderers Among Us

Mila 18 by Leon Uris. (the last two fiction but gave you the flavor)

Justice in Jerusakem (about the Eichmann trial by the prosecutor)

Thanks for the list, but there was nothing for children.
I got a zero--- accused of cheating/lying by my 6th grade teacher for reading Minister of Death by Quentin Reynolds about Eichmann. She said that she couldn't believe a 6th grader could read such a book.