I enjoyed reading Lahav Harkov's interview with Prime Minister Naftali Bennett. I've been his supporter all along and first met him when he was head of Moetzet YESHA.

There were little things I noticed in the interview, like using the correct craft/verb when describing his kippah as crocheted. But his politics is more important. It's amazing that he managed to put together this unlikely coalition especially when his "dowry" is miniscule. He's a full generation younger than Bibi, which shouldn't be forgotten. Bennett doesn't need to work, having made his fortune very, very young in hitech.

Bennett doesn't claim to have a Right wing government, but policies aren't very different from decades of Likud. Please don't forget that there's hardly a Likud Prime Minister, if any, who didn't destroy Jewish communities, and that started with Menachem Begin. Bibi was no different. I remember hearing him say that although he talks "Right" he believes that as Prime Minister he needs to be in the Center. So I don't miss him and his mafia.

Bennett seems to have good control over the various issues Israel faces. I'm more nervous about when Lapid takes over. We'll see what happens. On the whole, I'm happy that the Bibi mafia is out. They found a way to stay in power "safely" by being perpetual "interim" governments sans coalition. Bennett and his coalition partners out-maneuvered them by doing the "impossible." Remember that the pundits claimed it wouldn't last a month....

I've been following Israeli politics closely for over half a century, and it's a great show! 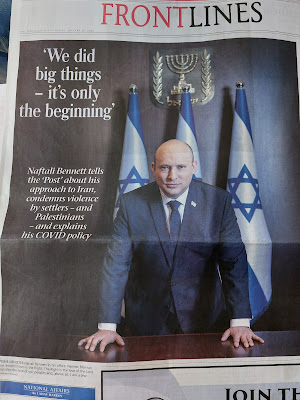