Lighting Up The Nations, A Book Review 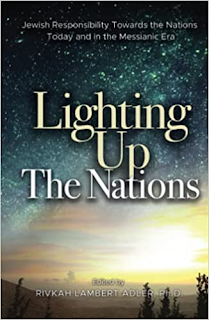 Lighting Up The Nations: Jewish Responsibility Towards the Nations Today and in the Messianic Era Edited by Rivkah Lambert Adler Ph.D is a fascinating and varied collection of essays about how Jews should react to Christian interest in the Jewish Bible and theology.
In the past half a century quite a number of Christians have begun to doubt their own theology. Careful reading of the Jewish Bible make it clear that their religion goes against basic principles, Saturday Sabbath and more. Even more confusing for them is the survival, growth and military victories of the State of Israel and the fact that the Jewish People have somehow gotten stronger after the Holocaust. Christian doctrine makes it clear that the Jewish People would cease to exist. But we haven't cooperated. Thank Gd we're thriving instead.
How are Jews supposed to react to Christians who want to ask us questions? The tradition response was that it's forbidden to enter such dialogues with Christians because they must certainly have an ulterior motive to convert us, Gd forbid. But now things are changing. There are rabbis and knowledgeable Jews willing to dialogue and even teach Noahide Laws and Jewish Thought to searching/curious Christians. This sometimes even results in Christians converting to Judaism.
As a forty year resident of Biblical Shiloh, I'd find it ironic that davka church groups from all over the world were enthusiastically flocking to Tel Shiloh, the site of the Biblical Tabernacle, when Jews were ignoring it. We used to host groups in our home and led them on tours of the ancient site. Every time I go for a swim in nearby Ariel I'm reminded of them,  because the swimming pool I go to in Ariel was funded by Christians in honor of Billye Brim, who had been a frequent guest of ours.
The essays in Adler's Lighting Up The Nations were written by a number of people, not just Adler. I'm not listing my "favorites," because I highly recommend that one real all the chapters. Granted this isn't light reading, but each chapter contributes something important. Read at your own pace.
Some chapters deal with Noahides, converts, Torah learning with Christians, and others correct the bad translations that Christians follow to reinforce their theology. Of course we shouldn't forget that quite a few Christians end up converting to Judaism as a result of their serious Bible studies.
I hope you get much out of Lighting Up The Nations, as I have.