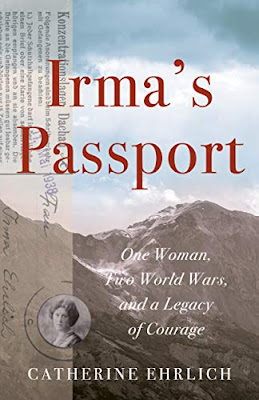 Catherine Ehrlich wrote an amazingly compelling biography about her grandmother, Irma's Passport: One Woman, Two World Wars, and a Legacy of Courage.
Irma Ehrlich's story is both profoundly personal and strongly historic. Irma's Passport can be enjoyed both by those who have a good knowledge of the Holocaust and also, those who haven't yet learned all that much about it. Catherine Ehrlich certainly did her grandmother proud in this very informative and moving book.
Not only did Irma live through two world wars, but she was also twice widowed. Her second husband Jakob Ehrlich, a well-known Zionist activist, was one of the first Jewish victims of the Nazis, and she and her teenage son Paul, Catherine's father, successfully fled. The bureaucracy she faced and had to conquer was a cross between The Twilight Zone and Catch 22.
Paul and Irma made it to England where he was accepted into an elite boarding school, and she quickly became a successful spokesperson in Britain and North America warning about the dangers of Nazi Germany. Just as she was about to accept the position as Chaim Weitzman's secretary they received notice that they could emigrate to the United States.
Irma accepted Paul's request that they start yet again in a new country.
Irma's Passport also tells of Irma's earlier life. In many ways she was a feminist, being one of the only females in the university. Her life was full of challenges, which she managed to overcome with intelligence, determination and luck.
I definitely recommend Irma's Passport for all, young and old. Catherine's labor of love, her grandmother's biography is truly inspiring.