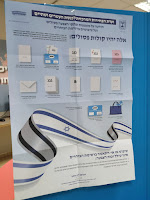 Odd couple for sure. There's no humor in the present Israeli coalition of Bibi-Gantz, Likud and Blue and White plus the chareidim and a few others. Gantz's political career was founded on and focused on declaring Bibi Binyamin Netanyahu unfit for office and replacing him. But then, after three failed attempts to legally unseat him as Prime Minister, Gantz folded and accepted a deal with Bibi. Bibi trapped him with a newly invented title "Alternate" Prime Minister with all the expensive trappings of the office without any authority or responsibilities. When Gantz and his cronies offer opinions aka "alternative" policies they're accused of "interfering."

In the meantime, polls are showing Gantz and his remaining Blue and White Party dropping, while his former political partner, Yair Lapid, is now holding second place, aka head of opposition.

Politics is a complicated profession. Each country has its very own system, requiring wannabes to learn a complicated lexicon of skills to really succeed. There's no competition between the skills and experience of the Likud MKs with Gantz and his cronies.

Could the downward spiral of Blue and White have been the aim of Binyamin Bibi Netanyahu's offer to Benny Gantz all along?